Home Uncategorized Three L.A. Garages We Wish We Could Live In 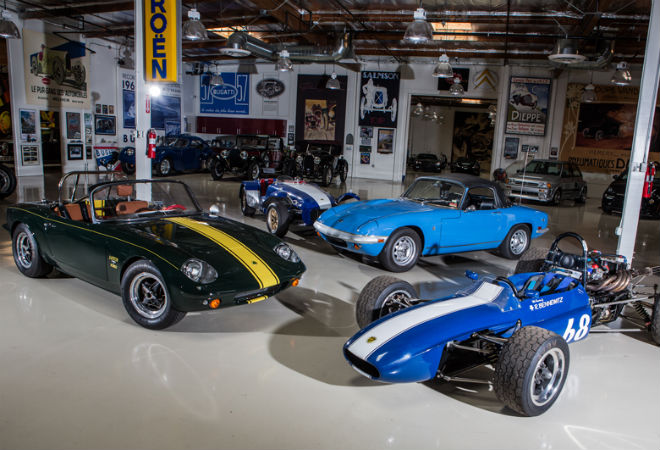 We’re this close to developing self-driving cars, but no closer to inventing a sedan or SUV that folds up and fits in your pocket. Until that day comes, drivers are tasked with the odious responsibility of finding a place to stow their ride. A regular old attached garage just wouldn’t do for some particularly dedicated L.A. car-lovers, so they built the following extreme homes for their wheels:

Jay Leno’s Airplane Hangar:
The former Tonight Show host is a car maniac, and all those NBC bucks helped pay for hundreds of luxury vehicles that he houses in a hangar near the Burbank Airport. Leno tucks 130 cars and 93 motorcycles inside this massive space that would give the Petersen Automotive Museum a run for its money. Aside from the gleaming McLarens, Lamborghinis, and Bugattis, there are entire sections for American muscles cars and British beauties. Posters and pictures of classic cars line the walls from floor to ceiling, and spare parts, memorabilia, and engines (including a 22-liter airplane engine used in a 1917 Fiat) fill the remainder of the space. Leno has a second hangar featuring steam-powered cars and a repair shop that employees four full-time mechanics. Hollywood Garage/Art Gallery Hybrid:
A handsome condo building sprouted on Yucca Street in Hollywood in the late Aughts, but instead of featuring a scary, dark, concrete-laden subterranean garage, drivers pull in and out of a mini-modern art museum. The building, known as The Hollywood, was designed by Kanner Architects and features the work of street artists like Mr. Brainwash, Retna, and ManOne. We’re not talking a few murals here and there; the entire garage is covered with art, including depictions of Clint Eastwood wearing a Dodgers hat and Marilyn Monroe in shades. The Great Garagemahal:
Molly and Stan Hyman built Burbank’s infamous Garagemahal in 1995 to store their auto arsenal. Built to hold six cars, along with space for equipment and workbenches, the garage has a 12-foot ceiling and vehicle lift. There’s an also an elevator that leads to the Mediterranean-style house above, a dwelling that was mostly an afterthought. “We laid out the garage first and then built the house around it,” Stan told the L.A. Times. The retired couple put the house on the market three years ago so they could travel around the hemisphere in their 45-foot luxury motor home; the Garagemahal found a buyer and is currently off the market.