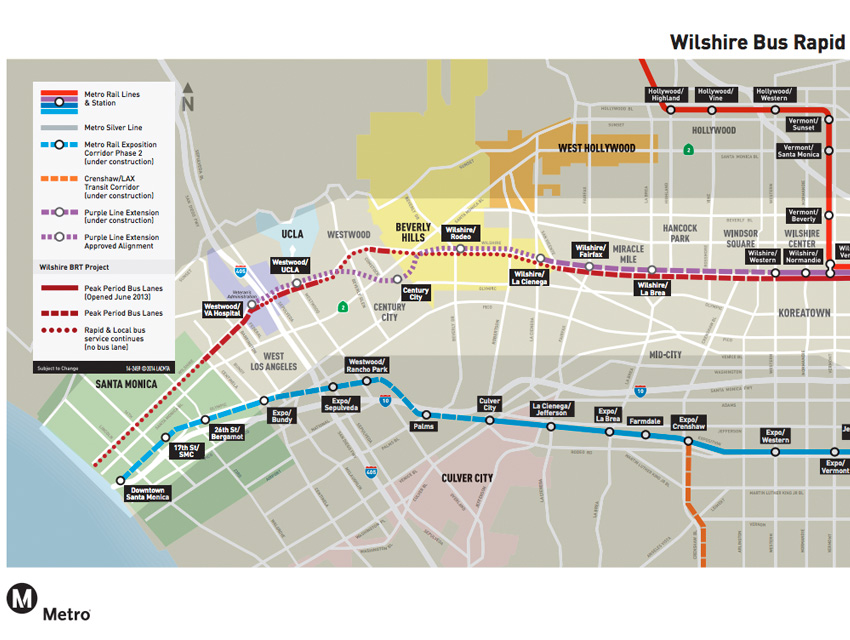 To the delight of transit users, and possibly the chagrin of drivers, bus-only lanes opened Wednesday on a 3.6-mile stretch of Wilshire in mid-Wilshire and Miracle Mile. There are now 5.4 miles of rush hour, bus-only lanes that stretch from MacArthur Park to the border of Beverly Hills (another stretch in West L.A. opens in the fall). Transit riders could see nearly 15 minutes of saved time during cross-town commutes.

Mayor Garcetti and several councilmembers cut the ribbon on the lanes yesterday (including, ironically, councilmembers like Paul Koretz who resisted adding the lanes to areas of their district). Between the hours of 7 and 9 a.m., and 4 and 7 p.m. on weekdays, the parking lane on Wilshire is accessible only to buses and cars entering the boulevard or making a right turn. Violators will be hit with hefty fines if they drive in bus-only lanes during this time.

As mentioned before, the lanes are a good step but far from perfect. They cut out in Condo Canyon, Santa Monica, and Beverly Hills; Wilshire in 90210 is especially traffic-prone.

Metro is calling the lanes a BRT, aka a bus rapid transit project, though some would say, “not so much.” The Valley’s Orange Line is a more typical BRT, with a dedicated lane, elaborate stations, outside fare boxes (so people don’t have to drop coins in a machine at the front of the bus, something that holds up boarding), and multiple entries for swift exits and entries. The mayor indicated the Wilshire buses will experiment with multiple entries, which would certainly be another step in the right direction.