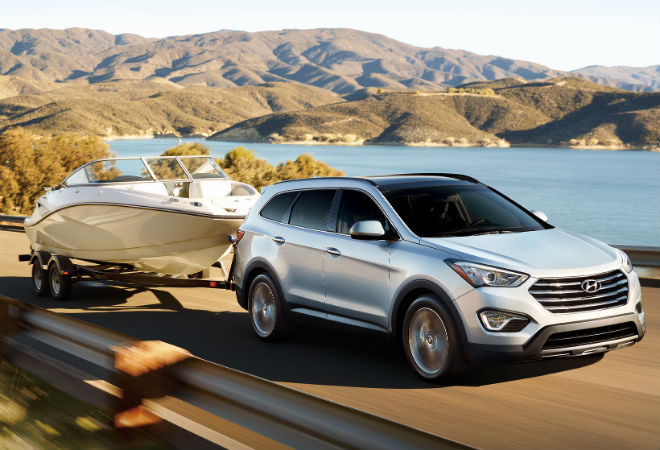 The SUV. You drive one, or, someone you know and love drives one. There’s one passing you right now. Because of American downsizing, high gas prices, and a more eco-conscious shopper, sales for full-sized SUVs have been on the wane. That’s not to say SUVs are disappearing altogether. In fact, the market share keeps gaining steam from sales of smaller, crossover SUVs. Honda CR-V, the segment leader, sales are up 6.1% year over year, Toyota RAV-4 up 15.5%, and the list keeps going. It seems like everyone—Jeep, Nissan, Porsche—is pushing out a more petite, cute ‘Ute, much to the chagrin of station wagon lovers.

You can still get them big and meaty, like the new Cadillac Escalade, an SUV with so much chrome, so much girth, and so much power, you’d think gas was still 99 cents a gallon and there was a Bush in the White House. Or, you can get them small and weird like the Nissan Juke, which is so awesome and so tiny, it’s like a J-Pop band transmogrified into a mini-SUV.

Huzzah! For when your Porsche Cayenne Turbo S or Mercedes-Benz G63 AMG isn’t ostentatious enough for you (though it should be, considering half of the Jenner/Kardashian brood drive them), you can go super-duper ritzy high-end with the forthcoming 2016 Bentley SUV, which, I’m told, will look and feel like a Bentley. This means lots of leather, oversized proportions that will sell like delicious $200,000-plus gold-plated hotcakes across the Southland.

If you’re enticed by diesels, like the Porsche Cayenne, Audi Q5 and Q7s, and  Mercedes-Benz ML and GL models, then you should look at the new BMW X5 xDrive35d—hands down, one of the best cars, trucks, or SUVs I’ve driven this year. (Which came as a surprise to the Gentlemen Journalist, too. I didn’t expect this massive Teutonic truck to win my heart, but, historically, the Germans have always been an easy people to love.) BMW’s X-models are perennial best sellers for the luxury brand. The X5 is a standard SUV—tall, upright, four doors, lots of room, shaped like a brick—but there is something about the way BMW made the lines so taut, so sexy. Also, that inline 6-cylinder TwinPower Turbo diesel engine is, simply, a masterpiece. While you won’t see that much better gas mileage than a gas engine—about 31 MPG compared to 27 MPG highway—all that power and torque makes it a lot more fun to drive.

If you want something American, on the smaller side and pretty dang luxurious, you can look at the new Lincoln MKC. Lincoln has been putting a lot of effort into the brand—it’s been a pet project for Ford’s head of marketing, Jim Farley—and it shows.

I had a chance to test the new MKC recently though the wilds of Santa Barbara and, dollars to donuts, I found myself pleased by the ride, especially in the upmarket Reserve edition, fitted with all the bells and whistles. It also looked great, with sinewy sheet metal and a nicely put together interior. The MKC was fast and handled with aplomb on the twisty roads between the coast and horse country. That has a lot to do with its 2.3-liter Ecoboost engine, which kicks out 285 horsepower and 305 pound-feet, all from a turbocharged four-banger. For about the same price as a Q5, it presents a compelling cross-shop to the ubiquitous, at least here in Laurel Canyon, Audi.

“L.A. is definitely a target for us and it’s important for us to sell cars in NYC and L.A., as well as the smile states as they set the trends for the rest of the country,” Lincoln’s Jeff Reid said of the Los Angeles auto market. “For Lincoln, it’s about brand perception and it’s something were working on over time. When people see the way the brand is progressing, it will really effect the way people think of the brand.”

The Japanese and Koreans have been making some serious strides in the SUV market, too. I really like the new Mazda CX-9 Grand Touring, which has a sweet soccer mom vibe to it and looks like it should be priced a lot higher than the sticker price. Alternatively, check out Kia and Hyundai SUVs for value, which the Gentlemen Journalist, despite his outré fancy manner, respects. I like both brands a lot. They’ve come a long, long way since the ‘80s, and may now finally be on par with their Japanese rivals like Honda, Nissan and Toyota.

The smaller Kia Sportage and its larger sibling, the Sorento, are both great values. They look sharp and even when fully kitted out, cost less than a few options on the Porsche Cayenne Turbo (ceramic brakes, Cayenne Turbo Powerkit, etc). While not a true SUV, I love the new Kia Soul, just because it’s as weird and awesome as a Juke but looks like a futuristic bread truck!

The same value to quality delta applies for the Hyundai SUVs, the Tucson and Santa Fe. Despite their names, these models remind me less of expansive desert vistas and over the top candy colored sunsets and more of nice houses in Encino with lots of kids playing in the driveway.

Perhaps naming SUVs after cities in the Valley—like The Tarzana, The Encino, or The Agoura—would suit the brand message for these mom mobiles much better.