Home Transportation The Story Behind the 101’s Giant Flower Hearts 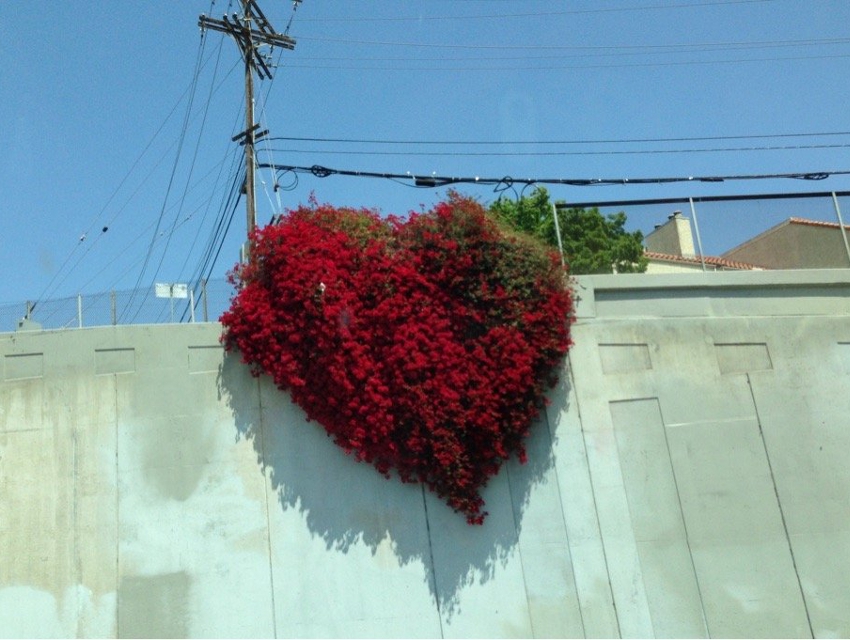 Fighting L.A. traffic is not for the weak-willed. The rush-hour crawl on the 101 from Hollywood to Downtown is especially dour as the freeway dips underground offering little to look at, save for litter and tattered tents. But visual respite has brightened the drive for the over 200,000 people who traverse the route daily: two floral arrangements, both pruned into the shape of a heart.

Driving south into DTLA, drivers first encounter the Hollywood Heart, an assortment of magenta bougainvillea that line a Vine Street retaining wall across from the Capitol Records building. Someone is clearly shaping and caring for the Hollywood Heart, botanist Frank McDonough of the L.A. County Arboretum and Botanic Garden told the Daily News. Using Google Street View, McDonough figured out the heart-shaped design was crafted around Valentine’s Day of last year.

A local photographer who battles the 101 every day became fixated on the Hollywood Heart—Susan Freitag researched the heart by calling Caltrans, who confirmed they’re not shaping the flowers, and recruited other artists to capture the design in pictures. Freitag hopes to assemble the images for a coffee table book.

Meanwhile, five miles southeast in Echo Park, another heart has taken shape. This one, made of artificial fuchsia roses, has brightened up a dusty hill and, again, Caltrans has said it’s not their handiwork—four or five young women were spotted shaping and maintaining the roses.  Others were so inspired that they added an “I” and an “L.A.” on both sides of the flowers (Caltrans ended up removing the verbiage, but kept the arrangement).

The pruning ladies haven’t been spotted recently, but an area resident, 71-year-old Egenio Calderon, says he make take over the duties. “It’s something pleasant for the eye, instead of seeing trash all over,” he told the newspaper.