Home Uncategorized The Secret Life of Cars: The 24-Karat DeLorean 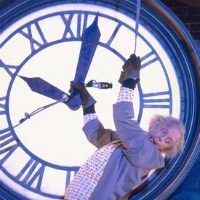 Every car has a story. Particularly the ones found in the basement of the Petersen Museum—better known as The Vault. Each week, L.A. Driver hand picks an automobile from this prized and hidden collection and, with the help of the experts at the Peterson, reveals its remarkable history.

In 1981, American Express had the Midas touch. After releasing its premier Gold Card, the company wanted to offer its members something glamorous to match their new plastic. So, American Express arranged a once in a lifetime deal for its cardholders: a DeLorean DMC-12 … plated in sheets of pure gold.

This was before Back to the Future turned the Delorean into a world famous time machine, so the sports car needed the publicity. John DeLorean’s non-precious metal-covered models sold at a pricy $26,000. American Express charged $86,000 for these 24-karat cars, requiring that buyers put the $10,000 down payment on their Gold Card (see what they did there?).   The two companies were so sure that these DeLoreans were going to be a hit that it planned on manufacturing one hundred of them.

Only two gold DeLoreans were ever sold. The one shown here was owned by Roger Mize, who treated the car like a trophy. He kept it on display in a glass case in the lobby of Synder National Bank in Snyder, Texas for twenty years, and to this day the car has never been started.  There are a meager nine miles on its odometer—most of those miles racked up when it was moved to the Petersen Museum in 2003. It now sits, shimmering, in the Vault until there’s an appropriate exhibition—or until Dr. Emmett Brown gives it a jump start.  Its twin currently resides in Reno in the National Automobile Museum.