Home Uncategorized The Life and Death of Ugly: Yugo—No, You Go 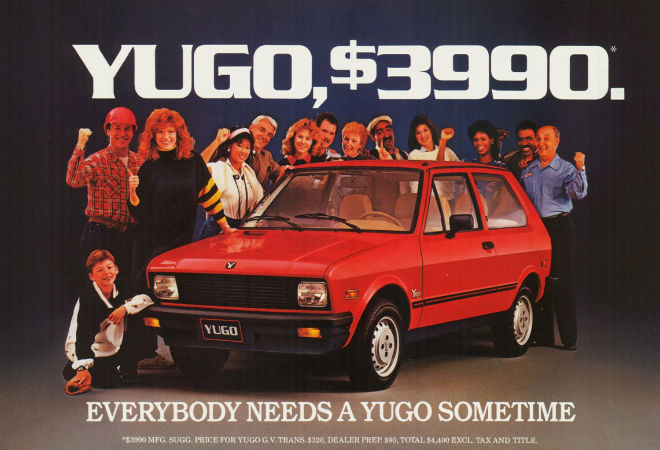 “Yugomania” swept America’s roads in 1986. Built in Soviet-bloc Yugoslavia, The Yugo was produced by Zastava, a one-time arms manufacturer. Given the boxy, no-frills look of the Yugo, this should come as no surprise. With a starting price $3,990 for the entry-level GV hatchback, it was the cheapest car ever sold in the United States. What did GV stand for? “Great Value,” of course.

Equipped with the 1100 cc engine and four-speed manual transmission, and boasting very practical standard features such as fabric upholstery, full carpeting, and opening rear quarter windows, these “econo boxes” sold like hot pitas. With ad slogans like “Buy a Little Freedom by a Yugo,” and “Everybody Needs a Yugo Sometime,” the Yugo was the nation’s thriftiest new car. As historian Jason Vuic states in his book The Yugo: The Rise and Fall of the Worst Car in History, the Yugo was “the fastest-selling first-year European import in history.”

But Yugo’s enormous success was swiftly overshadowed by its disastrous faults. Strewn across the country was a series of blown motors, failed electrical systems and broken door handles. In one terrible and highly publicized incident, Leslie Ann Pluhar came to a stop in her ’87 blue Yugo on the Mackinac Bridge in Michigan, attempting to wait out high winds, when a 55-mph gust blew her car over the edge. She did not survive the accident.

In 1992, Zastava was forced to stop exports in response to United Nations sanctions on Yugoslavia. Seven years later, in a series of air raids on Serbia, NATO bombs destroyed the company’s automotive division, and Yugo’s day in the United States was shut squarely in the past.