Home Uncategorized The Jayne Mansfield of Freeways: Drama on the 710 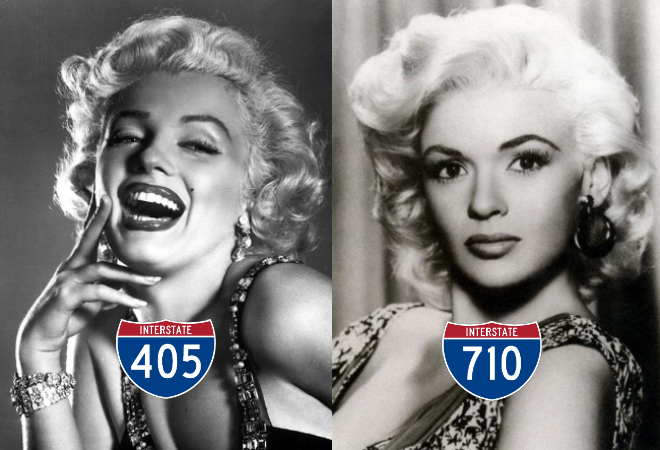 When it comes to controversy, "think of the 405 as the Marilyn of freeways and 710 as the Jayne Mansfield."

The 405 may be the most infamous freeway in all of Los Angeles, but the 710 rivals its western neighbor when it comes to drama, intrigue, and unhappy endings (think of the 405 as the Marilyn of freeways and 710 as the Jayne Mansfield). The subject of battles and rallying cries since it was carved into its current form in the mid-60s, the 23-mile freeway originates in Long Beach but abruptly ends in Alhambra, causing cars to spill out to the neighborhood and clog residential streets. But the effort to fill the 710’s gap by extending the freeway to Pasadena and the 210, as it was originally envisioned, might finally be coming to a head.

Metro and the California Department of Transportation are in the midst of an environmental study looking at the feasibility of a 710 tunnel underneath L.A., South Pasadena, and Pasadena. The transit and freeway agencies are also looking at building a light rail or bus way instead, or simply attempting traffic mitigation measures to address the gridlock at the 710’s northern terminus. But it’s the nearly five-mile tunnel that’s long been viewed as the most realistic option even as it remains one of the most contentious.

Aside from a price tag north of $5 billion—it would be funded through taxes and possibly a public-private partnership—many communities don’t want to encourage more traffic in the area, even if it’s underground. The cities of South Pasadena, Sierra Madre, Glendale, and La Canada Flintridge have come down hard against extending the freeway, though Alhambra, El Monte, and Duarte are supportive, since the tunnel will mean less cars cutting through their streets.

What everyone agrees on is that a surface extension of the 710, a proposal that would have required the demolition of hundreds of homes, should be off the table. Even Governor Jerry Brown said no to that option by signing a bill in October expediting the sale of more than 500 homes purchased by Caltrans decades ago to make way for a surface freeway extension. When sold, the homes will generate much-needed property tax revenue and any profits made during the sale will aid local transportation projects.

That proviso may send chills up South Pasadena spines, but some believe recent developments at Metro have put the nail in the coffin for any extension of the 710, even a subterranean one. A staff shake-up at the agency pushed out several champions of the tunnel, including powerful Highway Programs executive director Doug Failing.

“Essentially those proponents that were keeping it alive, a project that was on life support, are gone and hopefully with $40 million spent on an EIR we will be able to come up with an alternative that would actually solve the 65-year-old controversy, not inflame it even more, which would be the tunnel if it was chosen,” South Pasadena resident Joanne Nuckols told the Pasadena Star-News.

Others, like Metro Board member and tunnel opponent Ara Najarian, say the project still has plenty of supporters. Tunnel-haters should at least wait until the spring, when Metro and Caltrans release a draft of the environmental impact report, to raise the victory flag.