Home Uncategorized The Comeback of Ugly: Death and Resurrection of the Buick Riviera 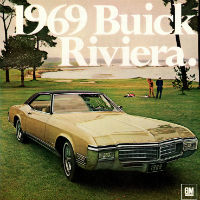 The first and second generation Buick Riviera, GM’s answer to the Ford Thunderbird, swept the “personal luxury car” market from 1963 to 1970. Sales continued to rise throughout its first seven years, until, in 1971, GM introduced some drastic style changes that turned even die-hard fans off, and sent sales plummeting. The brand never recovered its popularity, and the model faded away over the next two decades. However, on today’s roads (especially here in Southern California, where the climate is kind to classic car collectors) the third generation, ugly duckling Riviera is making a comeback.

Here is a look back on the car’s history: 1963: The 1963 Buick Riviera was unveiled on October 4, 1962. It was unusual in that it did not share its bodyshell with any other model. Its razor-edge roof, rear deck, and sides, aggressive front end (reminiscent of contemporary Ferraris) with an expansive egg-crate grille, and pontoon fenders made it one of the greatest styling accomplishments of the midcentury. 1964: The Riviera continued in model year 1964 with minimal trim changes. Leather upholstery was discontinued from the option list and the stylized “R” emblem was used for the first time. 1965: Changes to the 1965 model included concealing the headlamps behind clamshell doors in the edges of each fender. In addition, the side scoops between the doors and rear wheel arches were removed, and the taillights were moved from the body into the rear bumper. 1966: In the 1966 model year, the Riviera was significantly redesigned, and its sales set a new record. The body frame was made longer, wider, and more curvaceous. It no longer bore vent windows (a holdover feature from the 1930s). Headlamps remained concealed, but they now pivoted up above the grille when not in use, a very futuristic flourish. Rear seat belts were optional, as was AM/FM radio. Inside, the four-place cabin was replaced by a choice of bucket seats or conventional bench seats, making room for six passengers. 1967: The most significant change for 1967 was Buick’s new V8 engine with 360 horsepower, which carried a significant improvement in performance. Externally, very little changed except for the addition of a wide, full-width, center-mounted horizontal chrome grille bar that stretched over the headlight doors and outboard parking lights. 1968: In 1968, the model sported reshaped front and rear loop-type bumpers that wrapped around the grille and tail lamps. The interior was restyled again and shoulder belts for front window passengers were made standard on all cars. 1969: The 1969 models had minor styling changes, including a redesigned grille and a revised chrome side trim. Shorter front marker lights became square in shape. Inside, new headsets adorned the front window seats, and the position of the ignition switch was moved. At the rear, the reverse lights were moved from the rear bumper into the ’69 Riviera’s new three-section taillight lenses. Sales for 1969 set a new record. However, this trend was soon to change. 1970: The 1970 Riviera was restyled completely. Quad headlamps were exposed and nearly flush-mounted. The front bumper wrapped around and over the new vertical bar grille, set between the headlamp pods. An optional side trim feature accented the body’s flowing lines. Rear wheels were skirted and the new rear bumper/taillight was given a new motif. The engine was upgraded to the largest Buick had offered to date. Sales for the ’70 Riviera dropped significantly. 1971: The Riviera was radically redesigned for the 1971 model year. Given a flowing and dramatic “boat-tail” styling, a very popular style in the cars and speedboats of the 1920s and 30s, it changed the look of the car so much that sales plummeted. The 455 engine had a lower compression ratio to meet EPA emissions requirements and a reduced 255 horsepower. The 1971 Riviera also featured GM’s “Full-Flo” ventilation system with two, large, deck-lid louvers on the trunk lid. The system created an unfortunate vacuum effect under certain conditions that sucked rain and exhaust back into the car. 1972-73 The 1972 Riviera saw few changes to either style or sales, which led GM to believe that the boat-tail deck lid was too radical for most customers. They blunted and shortened the tail in 1973, but sales remained in a slump. The Riviera had lost its sporty image, becoming instead a large, finicky coupe.