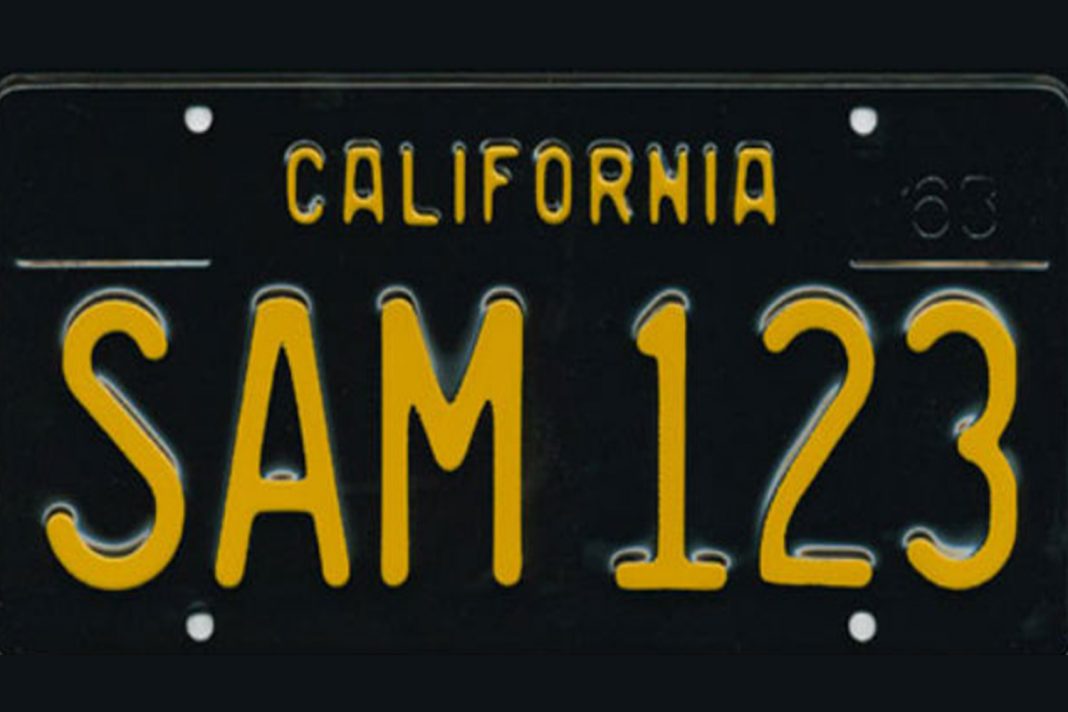 With recent news that the California DMV has begun production on the black license plates with the same gold lettering of the 1960s, we look back at the colorful history of California’s plates, prior to today’s most boring white-with-blue-lettering standard.

New York was the first state to require automobiles have license plates, beginning in 1901. At the time, individual owners were expected to make their own plates, showcasing their initials, and not adhering to regulations as to size or material. Massachusetts became the first state to issue manufactured license plates in 1903, with California following suite in 1913.

The size and shape of the state plates were not constant, varying from one jurisdiction to the next. When an owner registered a vehicle in a new state, they’d have to drill new holes to support the new plate, effectively turning their bumpers into Swiss cheese.

In 1956, the U.S. government came to an agreement with the Automobile Manufacturers Association that fixed the size for license plates for automobiles at six inches by twelve inches with standardized mounting holes, and set a 6-digit registration number format.

From 1963 to 1969, California-issued license plates featured gold numbers on black a black non-reflective paint with an embossed state name.

In 1969, the base color was changed to blue with gold lettering. The state name remained embossed.

In 1980, the standard issue registration numbers became the modern 7-digit format with a leading digit that remains constant followed by a 6-digit serial. Colors remained the same.

In 1982, California plates were made white with blue lettering, and an optional sun graphic was added behind the state name. This plate was awarded “Plate of the Year” by the Automobile License Plate Collectors Association in 1983. The sun graphic was discontinued in 1987, but the block lettering stayed the same until the script font we know today was introduced not long after.

We’ve been stuck with the character-less white plate with blue lettering, with California in a red script font, ever since.

However, the DMV stated that it wouldn’t begin re-making any of the plates until it has received 7,500 pre-orders for each by Jan. 1, 2015. Orders for the black plates flooded in, and the DMV’s plate manufacturer is warming its presses. The yellow and blue plates are still in a holding pattern until their order numbers meet the mark.

So, head over to the DMV’s  Legacy Plate Program page for information on how to mail in your order.