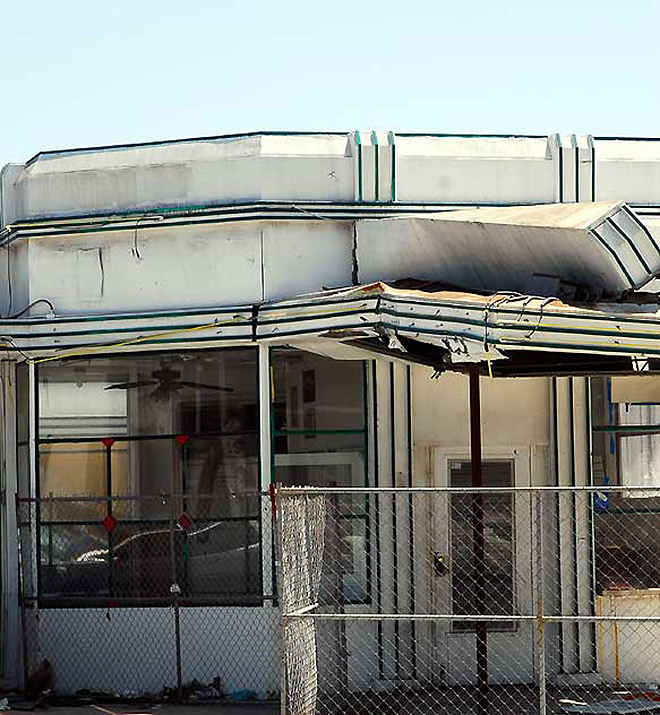 The “adaptive reuse” movement now de rigueur throughout L.A. has mostly focused on downtown office buildings, with old beauties gutted and turned into gleaming condos and apartments for the trendy and upwardly mobile. But it isn’t just developers seeing the financial benefit of finding new uses for formerly-forgotten buildings—several national retailers have set their sights on occupying funky urban oddities that many Angelenos have rubbernecked at, wondering, Why doesn’t anyone do something with that?

In swiftly gentrifying Hollywood, Starbucks is sniffing around the old Gilmore Oil Company gas station on Highland; the retro-looking white one with awnings that stick out like stumpy arms. The Seattle coffee chain is considering renovating the nearly 80-year-old station, a historic-cultural monument, and turning it into a drive-through coffee shop. The neighborhood is enthusiastic, likely emboldened by the fact that Starbucks successfully repurposed the façade of the much-loved and now-demolished Holiday Bowl Coffee Shop for their location on Crenshaw Boulevard.

Things were less copasetic in Long Beach, when Dunkin’ Donuts initially declined to keep the giant donut that floats above The Original Grind coffee place on Seventh Street and PCH that DD is taking over. Because the donut didn’t fit with Dunkin’s image, which aspires to be healthier, the franchisee wanted to give it to the city, which promised to store it until a permanent home was found. Local media and a Facebook campaign convinced Dunkin’ decision-makers to keep the frosted treat for their new location, a move that will undoubtedly endear them to their new neighborhood.

Incorporating the old with the new in has already been a winning combination for hipster brands like Urban Outfitters and the Ace hotel chain. Both doled out the dough to renovate blighted Broadway theaters last year, and in Ace’s case, an entire 1920s-era tower. After Ace moved into the former United Artists Theatre building, built by studio founders Mary Pickford, Charlie Chaplin, Douglas Fairbanks, and D.W. Griffiths, the crowds immediately swelled in January with tourists checking in and locals clamoring for seats at the restaurant, bar, rooftop lounge, and refurbished 1,600-seat theater. And when Urban Outfitters recently occupied the long-decrepit Rialto Theater, built in 1917, cheers of a reenergized Broadway drowned-out murmurs of gentrification and class tensions, especially when the Philly-based chain lit the long-dark marquee.

“Retailers are starting to realize a new generation of consumers appreciate a more unique shopping experience away from the traditional suburban shopping mall,” says Brigham Yen, a realtor with The Agency and the blogger behind DTLA Rising. “The resurgence of historic urban centers has given retailers the opportunity to think outside of the box and open their stores in architecturally significant spaces. These unique spaces help retailers establish a stronger identity with consumers in a saturated market.”

Chains are not something most Angelenos will admit to liking, but we have to admit that gulping a $5 latte in the driver’s seat of a Prius does feel a tiny bit more authentic when that coffee was sold under a century-old awning.