Home Uncategorized Taking the “Free” Out of Freeway: Investing in FasTrak ExpressLanes 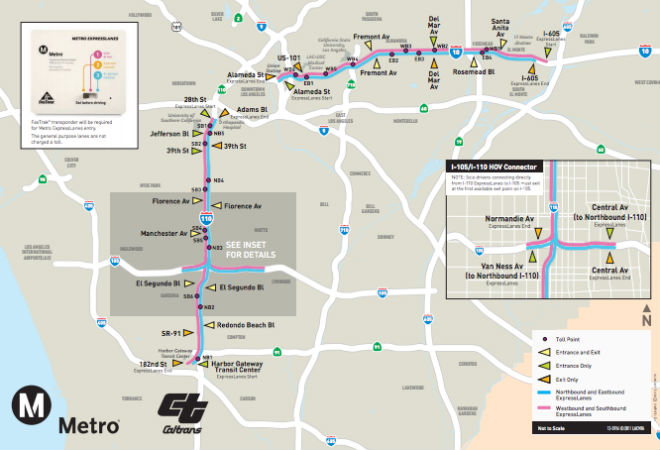 There’s a new front in the city’s war on traffic: FasTrak ExpressLanes. Metro and the California Department of Transportation are opening up certain carpool lanes to everyone, including solo drivers, if they’re willing to dole out some dough. After a year-and-a-half test run, Metro is making the toll lanes permanent. The system is daunting for the uninitiated, but we’re here to help:

Where are the ExpressLanes?
Currently, the toll lanes are on parts of the 10 and the 110, though Metro is considering expanding the system to the 405 freeway. On the 10, the ExpressLanes run for 14 miles from Alameda Street to the 605, and for 11 miles on the 110 from Adams Boulevard to the Harbor Gateway Transit Center.

How do you pay the required tolls to use the lanes?
All cars that use the ExpressLanes need a transponder—a little machine that electronically tracks your vehicle while in the lanes (motorcycles are exempt). They can be purchased at Costco, Albertsons, or AAA branch locations and families can purchase up to four. The transponders cost about $40—though luckily that amount can be used as a credit for your tolls—and they must be registered via the ExpressLanes website. Beginning June 1st, everyone with a transponder must pay a $1 monthly fee, though toll discounts are available for low-income drivers. After registering the doo-dad, Metro will have your credit card info and can charge you when you use the speedy lanes, just make sure to switch the transponder to the appropriate setting (solo driver, two-person carpool, three-person carpool) before driving. Carpool drivers need transponders, too?
Yup, every car using the lanes needs them. On the 110, vehicles with two or more people can use the ExpressLanes at any time, free of charge. But on the 10, cars with only two people will pay a toll during rush hour (5 a.m. – 9 a.m. and 4 p.m. – 7 p.m.). Carpools with three or more people on the 10 can use the ExpressLanes any time, free of charge.

How much does it typically cost to drive?
Metro uses “congestion pricing” to determine tolls, which adjusts cost depending on amount of traffic and distance traveled. Rates start at a quarter a mile—when traffic is light—and max out at $1.40 a mile during heavy traffic periods. The prices rise and drop to control demand, with the goal of keeping the ExpressLanes moving at least 45 miles per hour.  Electronic signs indicate the total cost of using the ExpressLanes to reach major exits, as well as the entire length of the toll lane, with average rush-hour tolls on the 10 about six bucks and four dollars on the 110.

What’s Metro doing with all the money from the tolls?
The agency has raked in over $34 million, which is helping pay for maintenance on the toll system, new buses, and upgrades to train stations and bus depots. The ExpressLanes are helping spur more transit-riders, which should also help reduce congestion.

Check out this overview from Metro:

Have you tried the ExpressLanes yet? Use #LADriver to let us know what you think!