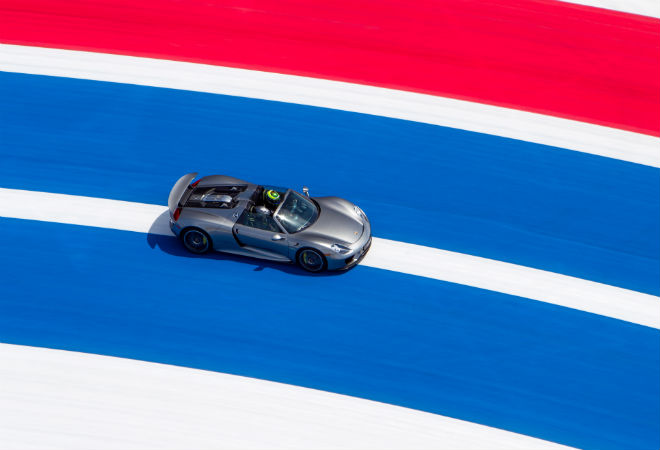 “Supercar” is a loaded term. Living in Los Angeles, we see supercars all around the city, sometimes without even noticing. Anywhere else, witnessing the never-ending parade of Lamborghinis, Ferraris, Bentleys, and Aston Martins rolling around would be enough to stop the most jaded of car fanatics dead in their tracks. But not here. Even the Gentleman Journalist sometimes falls prey to the same smug sense of automotive entitlement at seeing yet another $200,000 car cruising down Wilshire Blvd in rush hour. Meh. To quote The Simpsons’ Krusty the Clown: “I’m telling you, Bart, one vice leads to another and then you wind up like me: so jaded, the only thing that gets you off is free-basing ground-up moon rocks.”

Ladies and gentleman, after all of these years, I have found my moon rocks. Introducing the cure for the automotive malaise: the 2015 Porsche 918 Spyder, which is, hands down, the best car I have ever had the privilege to drive. The best? Why? First off, there is the engine, a rip-snorting 4.6 liter V-8/plug-in electric hybrid with 608 hp and 398 lb-ft of torque. It’s an electric hybrid good for up to 93 mph on electric power alone, yet, at the same time, it’s a street legal supercar capable of a top speed of 211 mph. The 918 is easier to drive and much, much, much faster than I expected. With just a few flicks of the wrist and a slight press on the pedal, the 918 goes where it’s pointed at such a high rate of speed, I may have stopped aging.

This is an electric hybrid, like a plug-in Prius or Chevy Volt. You’ve got about 18 miles of range on the electric power alone, but once you mash the gas the most mellifluous cacophony erupts right behind your head, thhwwoommp. The 918 is a thunderclap of German engineering, wrapped in a sumptuous carbon fiber body that looks how we all dreamed a street-worthy race car would look like in 2015. I had a chance to drive the 918, around the new Circuit of the Americas racetrack and through Hill Country in Austin, Texas, and to say the 918 Spyder is a hoot to drive on the track, is a compliment to owls everywhere.

Also, for those self-absorbed drivers out there, the 918’s automatic transmission takes the guesswork of which gear you need to be in on COTA’s backstretch, traveling at 187 mph, or when dialing you’re agent, lawyer, or girlfriend while stuck in traffic.

The 918’s buyers, who I assume will be the world’s oligarchs and titans of industry with some inherited money throw in, will find their time behind the wheel on the street a truly amazing experience, too. I had the chance to blast down empty Texas freeways and on small country roads past horses and cows at 90 mph in pure electric mode and then, when the moment came, I stepped on the gas and unleashed the totality of the 918’s power. It was one of the most exhilarating moments I’ve ever had in a car and made me wish I went to Harvard Business School instead of CalArts. Sorry, mom. “It can be used for everyday life, especially in Southern California where you can drive comfortably from work and home on pure electric power or press the gas and hear these really visceral sounds emanating from directly behind your head,” said Porsche production manager, David Burkhalter.

Patrick Long, who is not only a local, but also a Porsche’s Werks Factory Driver and member of Patrick Dempsey’s race team (read: the most professional of professional drivers), said he wants to take the 918 up the PCH in electric mode with the windows down. “Then I get up onto Stunt Road, or Mulholland, or Decker, put it into race mode and just let it go,” he said.

How much? The 918 has a base price of $845,000 and, with all the options, you’re looking at close to a million (or $997,000 to be precise) for the privilege of ownership.  So, for the cost of a nice house in the Hollywood Hills, you get the world’s best daily driver. Really, a small price to pay for perfection.