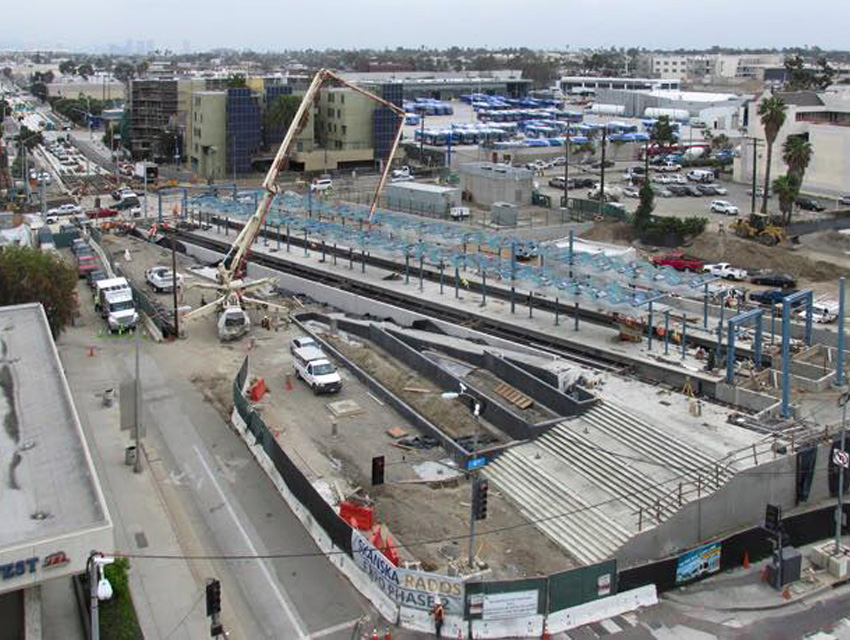 We are in the home stretch of construction for the Expo Line light rail extension to Santa Monica, with work scheduled to wrap this year and an opening expected in early 2016. One of the most exciting aspects of the project is the western terminus station at Fourth and Colorado in Santa Monica, just a few blocks from the pier and the ocean. For those who frequent the area, the under-construction station is covered in a lot of tarps and equipment, but a new picture captures the embryonic station in all its glory.

The snap, from the city of Santa Monica, shows how massive the station is and how big its effect on downtown SM will be. Half of the “grand staircase” is built, and when done will likely be filled with teenagers and seniors catching some rays while they wait for their train. Much space is given over to the forthcoming Colorado Esplanade, which is creating 20 to 30 foot long sidewalks on the south side of the Colorado Boulevard, an area for jogging, and a separated bicycle track. As mentioned in this blog previously, Colorado will be a one-way, westbound-only street when the Esplanade opens (likely around the same time Expo opens). Also, expect a lot of planters and landscaping, as evident in the renderings.

For now, take a gander and wrap your head around the big and exciting changes coming to this once-dead corner.