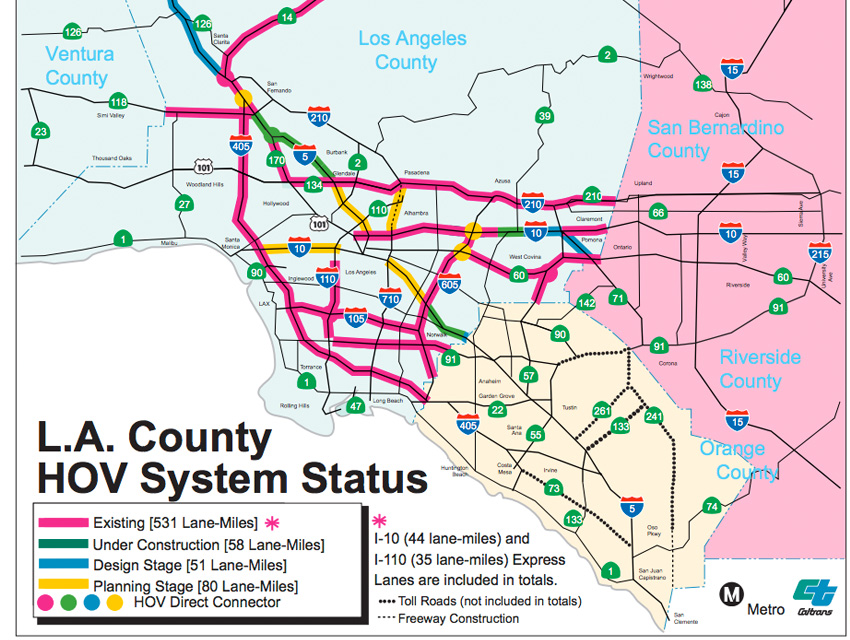 Attempting to start a long weekend in the desert on a Friday night (or afternoon) is fraught with utter traffic horror. Both the 60 and the 10 are jammed beginning at 2 p.m. While it’s only about 40 miles from DTLA to the intersection of the 15, it can routinely take two hours to cross that distance.

The FasTrack ExpressLanes on the 10 freeway—14 miles of exclusive lanes from El Monte to the 605 that can be accessed by carpoolers and solo drivers for a toll—have helped those who bought into the system. Now, the California Department of Transportation is working on making another five miles of the arduous east-west journey easier, at least for vehicles traveling with more than one person.

Construction has begun on new (free) carpool lanes, traveling in both directions from Citrus Avenue in West Covina to the 57 freeway. The $195 million project is scheduled to open in about five years and should ease things for Angelenos traveling to destinations east, as well as suburban commuters heading in and out of the city.

Caltrans is working to offer HOV lanes throughout the L.A. County to San Bernardino County route of the 10, and not just to encourage ridesharing.

Until there’s a bullet train to Vegas or Palm Springs, traveling with a buddy sounds like a driver’s best option.