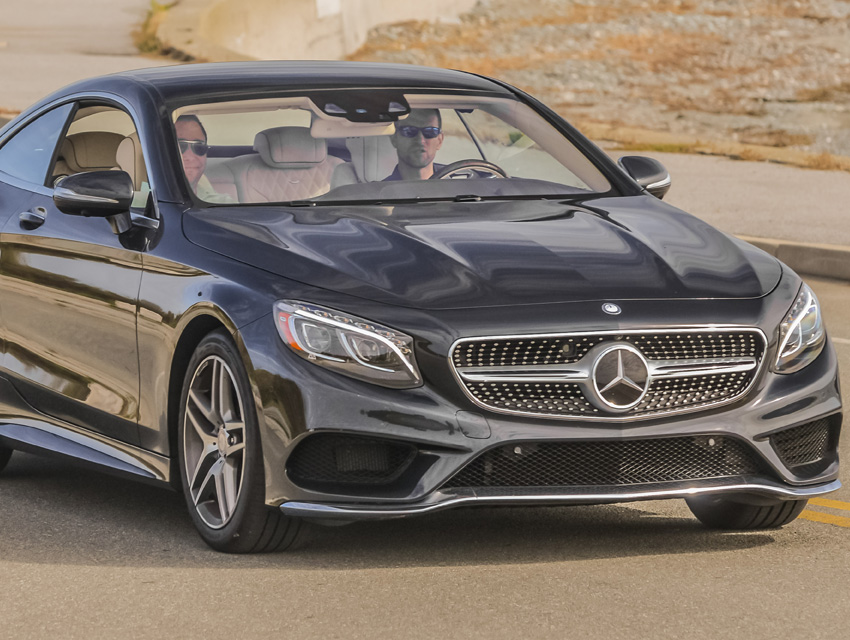 The German word Über roughly translates to “over and beyond,” suggesting the most extreme example of a person, place, or thing.

Though the term is more readily associated with a certain ridesharing service, it’s just as aptly associated with the new Mercedes-Benz S-Class Coupe, an imperiously elegant beast of a car that may as well be the official vehicle for heads of state, moguls, and plutocrats everywhere.

This two-door version of the S-Class sedan, available in S550 ($119,900) or burlier S63 AMG ($160,900) forms, is the artist formerly known as the CL coupe. But the new car bears so little in common with its predecessor that the reworked nomenclature is just the start of the car’s reimagined persona. First off, the S-Class Coupe’s lines have gone from staid to stately, with a delicately sculpted shape that’s been informed by Mercedes-Benz’s new design language. This is a vehicle that makes no apologies for its expansive size, which comfortably seats only two people, as the rear seats are merely a token nod to the concept of stringing another couple full-sized humans along for the ride.

But the view from those front seats is lavish: the cabin is an intricately harmonious mélange of quilted leather details and tasteful wood textures merged in an organically flowing sequence of contours and curves. We only found one fault with the S-Class’s cockpit: though the relative lack of buttons and switches has a visually soothing effect, it also means scrolling through a series of menus to achieve such relatively simple tasks like adjusting your seat. At least the task is accomplished via a gorgeous 12.3-inch display sitting alongside another screen that replicates analog instrumentation with an eerily accurate digital recreation.

Step on the pedal, and the S550 model scoots forward with swift whoosh and a latent purr, like a panther in stealth mode. Thanks to its 449 horsepower V8 and weight savings measures that have shed significant poundage, this base car’s performance is on par with some past AMG models. Step up to the more fire-breathing S63 AMG version (which makes 577 horsepower), and the grunt becomes even growlier, catapulting from 0 to 60 mph in less than four seconds—barely enough time to pull over and explain to L.A.’s finest why a self-respecting one-percenter would have the nerve to break the law. Despite the exhilarating rush of power, driver and passenger can savor cushy creature comforts like seats with hot stone massage while a glove box-mounted atomizer infuses the car’s cabin with their favorite scent.”

The beauty of the top dog S63 model is that it’s capable of violating the law so innocuously and so smoothly. Sure, there’s a bit more perceptible engine hum than you might expect inside the otherwise serene cabin (and the ride, though smooth, feels a tad more connected to the road that you might expect for a big Benz), but such is the bottom line of this 21st century übercoupe: it is epically powerful and ultimately capable of slaying smaller, feistier sports cars while maintaining its understated sense of calm. And for those wanting more, an even plusher, more powerful, 12-cylinder S65 Coupe will be available next year, offering yet another onion layer that proves you can never too much luxury or speed.

Stone Pale Ale and Ruination IPA Get a Much-Needed Makeover