Home Uncategorized A Short History of the Surf-Mobile 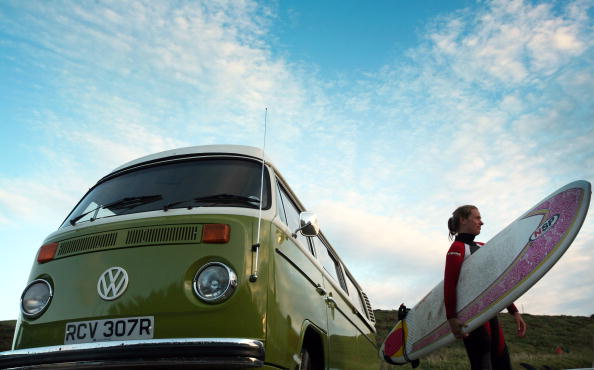 With the recent, disappointingly false news that we may soon be able to get our hands on a 2015 Volkswagen Microbus, we’ve begun pining over classic surf cars. In this series, we’ll catch a wave on the bitchin’ history of surf transport.

The Volkswagen Bus, officially labeled The Volkswagen Type 2, but also known as the Kombi, Transporter, or Microbus, depending on where it was sold, was not the first vehicle embraced by surfers, but it quickly became the poster child for a new generation that dove headlong into surfer lifestyle with more vigor than any before.

Designed by Dutch importer Ben Pon, and inspired by spotted boxy wagons carrying panels around Volkswagen’s car plant in Wolfsburg, Germany, the bus was introduced in 1949. Volkswagen’s second car model, following the Beetle (aka Type 1), it was originally offered in two body types: the cargo-carrying Transporter model, followed by the “Kombi” (short for combination, or kombination in German), which featured removable rear seats and additional windows. Both body types came with a distinctive split windshield, which garnered the nickname “Splittie.” In 1950, VW added the “Samba” model, with roof-top windows for extra viewing pleasure. The Samba was marketing for touring the Alps, naturally. They’d obviously not yet thought of the vehicle’s potential for ocean sports.

Variants to the first generation models included a Panel Van, a delivery van without side windows or rear seats, a Walk-Through Panel Van, with cargo doors on both sides, a Flatbed pickup truck, a Westfalia camping van that included an optional “pop up” top, an Adventurewagen camping van, with high roof and camping units, or a Semi-camping van.

VW produced the first generation buses for 17 years, from 1950 through to the end of 1967, though they enjoyed an extended life in Brazil, where production continued until 1975. The second generation debuted in 1967, and remained in production in Mexico until 1994 (German production ended in 1979). The new generation lost its split windshield, and was bigger, heavier, and slightly more rounded.

In all, there were five generations of the Type 2, but its first two generations retain the design features most similar to Volkswagen’s first passenger car, the Beetle. Generations 3 through 5 began to look merely like your standard passenger van, lacking in all the fun, quirky personality of the original.

The Volkswagen Kombi boasts the distinction of being the longest-produced model in the global automotive industry. However, it’s the Brazilian factory that kept the Type 2 in production the longest, until late 2013, allotting the iconic VW van a full 63 years of production (second only in production years only to Volkswagen’s own original Beetle).

When surf culture picked up in the 1960s, augmented by the nation’s swelling population of teenagers eager for adventure, the Type 2 found one of its greatest purpose: the transport of surfboards. Big as a studio apartment inside, ocean-bound thrill seekers could stack a few boards to the roof, or fit them inside along with a group of their best buds, and later, they could totally sleep in the thing.