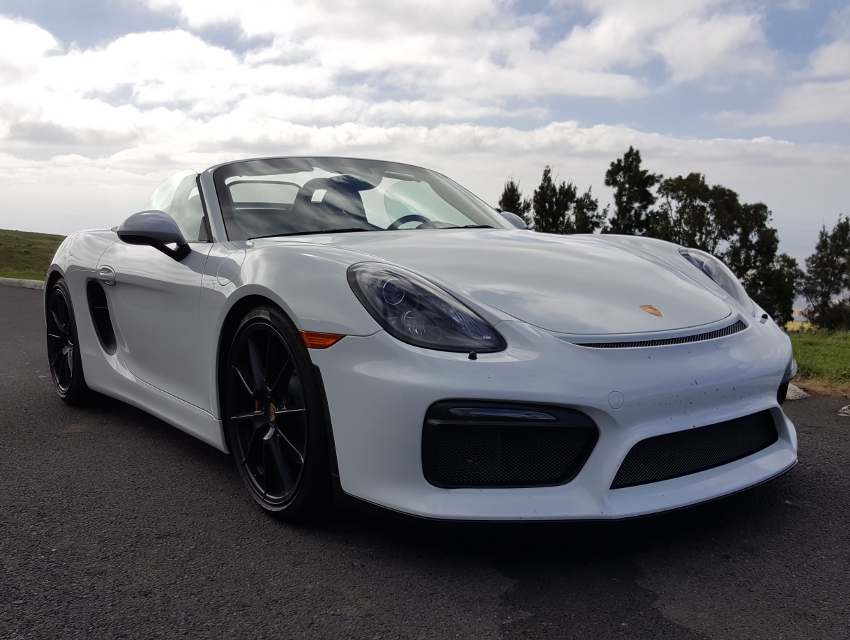 Sixty years after his famous, fatal car accident, James Dean has remained the king of cool. With his brooding expression and his iconic, widely emulated pompadour, Dean was a cultural icon and the perpetual symbol of teenage angst.

Dean was Hollywood’s rising star, with a penchant for racing cars. A Porsche-phile from the beginning, Dean raced a Porsche 356, the precursor to the famed 911, until he upgraded to a 550 Spyder in 1955. Nicknamed “Little Bastard,” Dean’s 550 became infamous for being the car that killed him at the peak of his career in one of Hollywood’s most tragic accidents.

While a vintage 550 Spyder will set you back a cool seven to ten million dollars, and that’s if you can pry one away from the likes of Porsche uber-collector Jerry Seinfeld, its sprit lives on today as the Boxster Spyder.

When the original iteration of the Boxster Spyder arrived in 2011, it wowed the market as a unique offering in the Porsche model line up with its raw, driver-focused, back-to-basics feeling and unique and, some may say, complicated soft top.

Porsche’s concept was simple; why not make a stripped-down, more-powerful Boxster, a car that was highly praised for its sharp handling and mid-engine balance.  I drove the car back then and it worked; it’s was as close to perfect as you’d get in a two-seater.

Fast-forward to 2016 and Porsche is now releasing their second generation Boxster Spyder, which is based on the totally awesome 981 platform. The formula for the new Spyder hews closely to the original: lighter weight, 66 lbs. less than the Boxster GTS , a stiffer suspension, unique aero bits and a manually-operated, minimalist soft top, which is 22 lbs. lighter than the standard Boxster top and a lot easier to use then the 2011 model. However, for the first time, Porsche has stuffed the 3.8 liter flat-six from the 911 Carrera S into the new Boxster Spyder, finally endowing the Boxster with more than enough power to complement its sublime mid-engined handling balance. At 375 hp, the Spyder features a significant 45 hp advantage over the GTS. Combined with its dry weight of only 2,899 lbs, the Boxster Spyder sprints from 0-60 in a supercar-like four seconds. Imagine the tickets you’ll wrack up on Mulholland or Malibu Canyon!

The Spyder delivers a pure driving experience without the sacrifice of luxury. A turn of the telepathic steering wheel places the car where you want it to go, flex your right foot and the Spyder leaps forward in an exhilarating rush to its stratospheric 7800-rpm redline. Drop down into a gear, and the melodic blip of the throttle followed by the snaps, crackles, and pops of overrun will make your ears feel like it was their first time hearing the mellifluous grumble of a flat-six. Repeat these things over and over again on an empty mountain road, or perhaps, stuck in traffic on La Cienega and you’ve reached driving nirvana, no matter where in L.A. you drive.

While the Boxster Spyder is all about the experience of the drive, it’s hard to ignore how incredibly beautiful the car is. With its classic mid-engine proportions and that unique, flared and streamlined aluminum tonneau top that hides the light, minimalist soft top, the Spyder is both gorgeous and unique. Also, compared to the complicated 15-step operation of the last Boxster Spyder’s top, the new top has been simplified and is much more usable.

Step inside and you’re greeted with another one of Porsche’s fantastic interiors. It’s both minimalistic and functional, yet brimming with luxury and character. Unique to the Spyder are lightweight cloth door pulls instead of handles, and the ability to order a pair of fixed, carbon-backed seats and delete the radio and AC.

We’d tick the box for the Spyder Classic interior package, which pays homage to the legendary Spyder models of Porsche’s past. The Spyder Classic interior is finished in an exquisite Garnet Red leather, sporty black Alcantara, and modern aluminum trim. If we had our druthers, we’d pair this interior with GT Silver metallic paint on the outside, giving the car a modern look backed by 60 years of racing heritage.

With a base price of $83,095, the Boxster Spyder is approaching 911 territory, but the two cars have very different personalities and play different roles in Porsche’s lineup.

While the 911 is ubiquitous and iconic in Los Angeles, the Spyder is an exotic thoroughbred with a visceral and raw driving experience. It’s a unique offering in the marketplace, with no direct competitors that deliver the same combination of exclusivity, style, and performance and in L.A., unique is the strongest point you can make.

Jon Alain Guzik is the luxury car columnist for Los Angeles magazine. He is the founder of DriveApart.com and dreams of owning an early-80s Ferrari 400i one day. For more of Jon’s writing, go to RideApart.com.