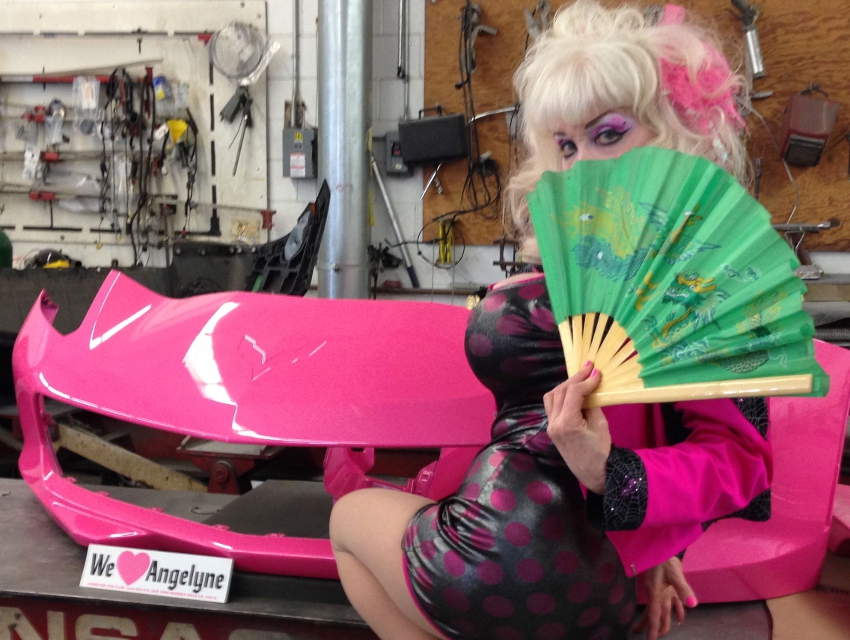 The enigmatic billboard legend Angelyne is famous for being famous—the original Kim Kardashian (without the sex tape)—and though her pictures have appeared above city streets for the last three decades, only her closest confidants know her original identity. This much is true, she tell us: she moved to Los Angeles in her teens to pursue a career in music. She was young in the city and needed wheels, and managed to scrape together enough cash to buy a car. She doesn’t remember exactly when and where she purchased her first corvette, but she immediately fell in love with it. It has since become almost as iconic as she is. Angelenos might know Angelyne for her Barbie bouffant and neon mini-skirts, but the pink corvette came long before she achieved notoriety.

Angelyne has owned seven different pink corvettes. When a car reaches between 75,000-83,000 miles, she buys a newer, updated version. She drives around 100 miles a day (“99 if I’m sick!” she jokes). This means that she has driven between 525,000-581,000 miles over her career.  It’s unclear what she’s done with all of her old cars. Some were auctioned off while others met legendary ends (some say a jealous heiress paid a homeless man to torch Angelyne’s first corvette). Though the details of these incendiary claims remain hazy, two things are for certain: Angelyne never looks back and she never slows down. Her eighth car is about to be unveiled, and L.A, Driver was there from purchase to polish.

She bought her new 2015 Corvette Stingray (in white) at Silver Star Chevrolet in Thousand Oaks. She then took it to Andre’s Auto Body and Paint in North Hollywood for customization. Every panel on the car was removed with a single tool (it used to take multiple tools to pop each panel off older models). While Andre’s Auto Body disassembled the car, master color mixer Ruben Hernandez at State Automotive Supplies in North Hollywood worked to find paint that matched Angelyne’s vision. When Angelyne purchased her first car, she kissed a napkin and a painter to match the color of her lipstick. The shades of pink have evolved over the years though they have all contained a secret mixture of glitter, metallic, and, of course, hot pink. Ruben has been mixing paint for nearly three decades and has worked on over 200 movies such as Godzilla, Rambo, and RoboCop. He and Angelyne developed a shade for her new ‘vette called “Heroine Pink.”

When Ruben finished mixing the paint, he sent it over to Andre’s Auto Body, where each white panel was painted with four to five coats of base paint and three to four coats of clear topcoat, which took 24-48 hours to cure. The car was then reassembled panel-by-panel and polished all over. Angelyne chose to include black accents around the borders of her car as well as a tinted glass sunroof. The wheels were detailed with silver glitter. The result? A futuristic ride for a classic Hollywood icon.

Flip through the pictures below to see the step-by-step customization of the 2015 Corvette Stingray, but first read Angelyne’s top-10 driving tips:

Angelyne is Selling One of Her Pink Corvettes for the First Time, and We’re Celebrating with 19 Photos