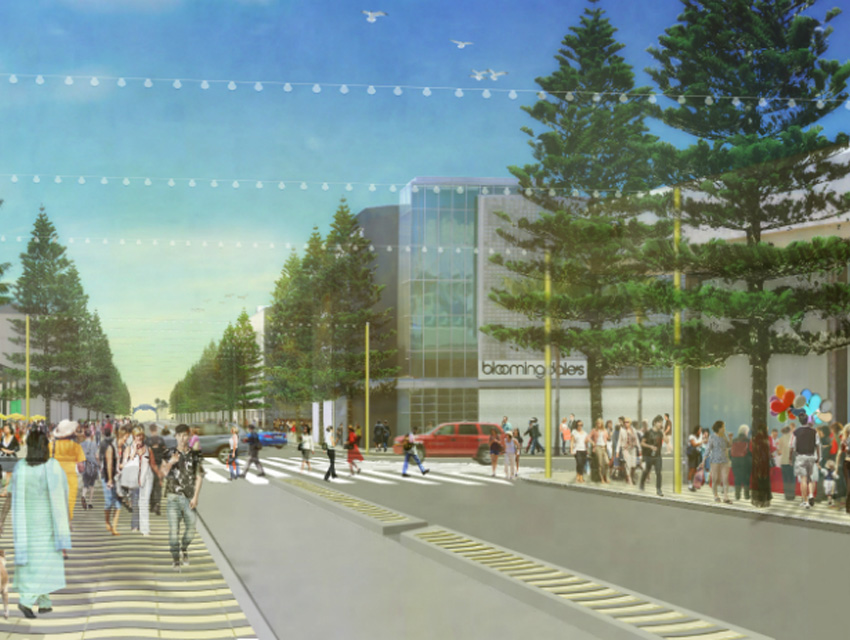 Colorado Avenue in downtown Santa Monica currently looks like a war zone, due to construction of new apartment buildings, hotels, and the Expo Light light-rail and its adjacent pedestrian esplanade. Soon, humble Colorado will be a thing of urban beauty, with thousands spilling out from the train station and ambling over to the beach city’s many delights. Aside from all the fresh amenities, Colorado Avenue will be changed in a different way: it will become a one-way road from Fifth Street—the edge of the train station—all the way to the pier. While a new one-way street seems novel, these conduits are no stranger to Los Angeles.

L.A. got its first one-way streets in 1947 when urban planners decided to isolate 5th and 6th Streets in downtown. The argument for one-ways is simple: no left turns into oncoming traffic. By eliminating the time it would take to wait for cars to pass, each one-way street moves more cars at a quicker rate. An uninterrupted traffic flow also helps synchronize traffic lights. More downtown streets, including 8th, 9th, Spring, and Main, were converted into one-ways in the mid-20th century. Many turned one-way to reduce congestion created by Harbor Freeway and subway construction, while 11th and 12th were altered to move cars more swiftly to the convention center.

Dissenters have always argued that one-way streets force commuters to cut through side streets, thus increasing the amount of traffic in residential neighborhoods. They also suggest that one-ways can potentially lengthen the distance of a commuter’s drive.

In the early 2000’s, L.A. County Supervisor Zev Yaroslavsky proposed converting Olympic and Pico boulevards into one-way streets. In a study, traffic engineers found that about 106,000 people used those streets everyday. If the streets were to be converted into one-ways they could accommodate nearly 20 percent more vehicles, significantly reducing commuting time. The streets would each be seven lanes (five for normal traffic and two for buses, vans, and emergency vehicles). This, proponents claimed, would be cheaper and more efficient that the proposed “subway to the sea,” a Wilshire Boulevard train route that’s now in pre-construction (and really a “subway to the V.A.”). They also claimed that the Olympic and Pico one-ways would cost less than freeway widening.

Of course, this was all more easily speculated than done. Olympic and Pico run through dense residential areas, and opponents feared that crossover traffic would disrupt the streets. There was also concern that the boulevards would become makeshift freeways, reducing parking, discouraging pedestrians, and basically killing business, especially on Pico, which is filled with mom-and-pop shops.

The plan, though championed by Yaroslavsky and former mayor Antonio Villaraigosa, eventually fizzled out, though the concept remains alive—though in a very different form in Santa Monica.