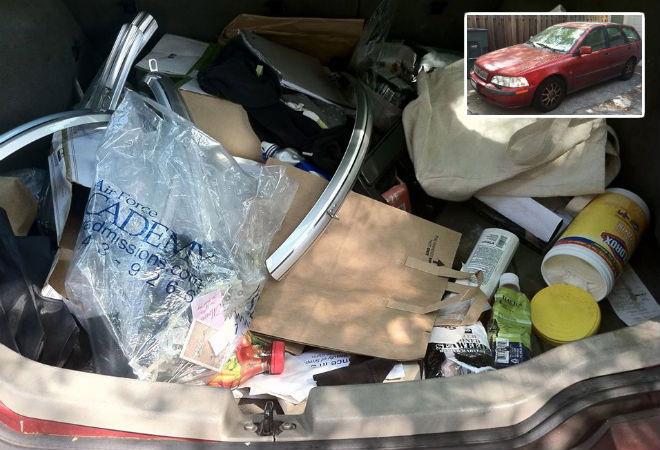 Loh bravely shared photos of her Volvo's trunk on Facebook this year.

You may recognize Sandra Tsing Loh’s voice from KPCC’s The Loh Life, The Loh Down on Science, or This American Life. Now, you can listen to the author narrate her latest book, Madwoman in the Volvo: My Year of Raging Hormones. We caught up with Loh to talk car culture and lady-hood:

Your new memoir is about dealing with menopause while caring for your preteen daughters and aging father. How did Volvo end up in the title?
The actual true story is that the book is based on an essay in The Atlantic called “The Bitch is Back.” My editor and I came up with other funny titles, like Menopalooza, There Won’t Be Blood, Angry Birds—that seemed too obscure or jokey. We liked the idea of menopausal madness. Instead of Madwoman in the Attic, I thought, Madwoman on the Freeway! It’s a very L.A. thing and the Volvo is ever more specific. Volvo has come to represent working soccer moms, and I happened to replace my mini-van with a Volvo in the early 2000s. This book is for the women driving those cars. Although, now that I’ve done two book signings in the Northwest, I found that in Portland, it’s Madwoman in the Subaru and in Seattle, Madwoman in the Prius. In your book, you compare your Volvo, full of half-empty water bottles and, at one point, ants (confession: we can relate), to your mother’s Buick. How does this reflect on motherhood back in the day versus motherhood now?
My mom was in this “Mad Women”-era where women wore aprons in the kitchen, white pleated skirts on the tennis courts, and full on silk dresses and lipstick and heels to go to the butchers. Her car was a Buick and it was immaculate. She had these foiled cheesecakes that she baked for my sister and me to snack on between school and music lessons.

It’s been about 50 years since Betty Friedan wrote The Feminine Mystique, and now we have far too many hats than we did before. Mothering is way more ridiculous, and we spend surprisingly more hours with our children per week than a 1950s mom. We’re driving our kids to practice instead of sending them out on their bikes saying, “I’ll see you at dinner.” You’re supposed to be an awesome wife, working full time, and obeying rules about housekeeping, like buying only locally grown vegetables. Women are trying to do 10 things, but we need to give ourselves a break and admit we really can’t do all those things. I can work and parent, but there are mice in my car. You discuss so many topics in your book—affairs, depression, auto-hygiene—that aren’t necessarily part of everyday conversation. What kind of dialogue has that opened up with you and your readers?
Women will tell me all of their physical menopause symptoms, definitely about gross stuff in their car. I’ve also heard from many women that they’ll drink too much coffee, get stuck in traffic, and really have to pee: “I’m menopausal and I have to pee right now!” I’m not a depressed person, but I certainly went through a phase this year where I needed to pull over on the side of the road and just cry. It’s hard to talk about that in regular conversation. Once you drop the mask and admit that your car is full of juice boxes and melted crayons, there’s so much bonding and fellowship in actually talking about these various things.

You narrated the audiobook, so people will listen to you talk about your Volvo in their own Volvos, like Volvo-Inception. Did you enjoy working on the recording?
Yes, absolutely. One of the most fantastic things about Los Angeles is the word—radio is really big. There is a way you can really hear people in the car; there’s magic because you feel so close to the person. There’s a real old-fashion element to that. I’m so grateful to live in a place where that’s possible.

According to Loh, the audiobook of Madwoman in the Volvo lasts about 7 ½ drives to Orange County. It is available on Audible.com; listen to a sample here: