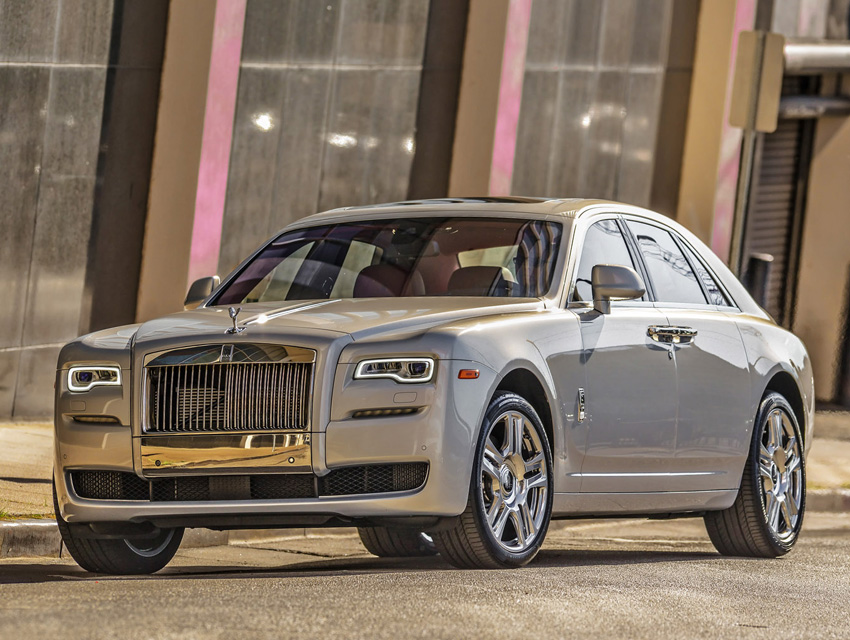 Don’t let the airy name fool you: the Rolls-Royce Ghost may seem like an ethereal ride with its inscrutably evocative moniker, dead serious silhouette, and schmancy cabin, but this entry level sled from the famously stiff and upright British brand harbors secret hot rod tendencies.

All seems calm and proper when you’re ensconced inside this swept back four-door. Climbing into the rear seats delivers the requisite level of theater, with backwards-opening suicide doors that swing shut with the push of a button. The driver sits behind an appropriately old-school steering wheel that recalls the Jeeves-ian era of servitude, honor, and expensive four-wheeled livery.

Untrained eyes may miss the subtle visual updates made to the Ghost for 2015, but the Spirit of Ecstasy—the famously windblown, 103-year-old lady on the bonnet of every Roller—has been tilted incrementally forward, reflecting the car’s heightened sense of sportiness. Look closely at the hood, and you’ll spot a new “wake channel” that trails behind her, widening slightly as it moves towards the windshield.

The old lass on the bonnet may lead the way with her outstretched wings and flowing silvery garb in this “Series II” iteration, but the driver gets the honor of commanding no fewer than 563 stallions with his or her (quite possibly crocodile-clad) right foot. But while we’re talking numbers, the digits that really matter when it comes to punching this big-boned sedan through space is engine torque. In the case of this Ghostie’s twin-turbocharged V12, the total torque pushed to the rear wheels is a thundering 575 lb-ft, enough to spin those massive Michelins in a delightfully adolescent screech, so long as you know how to navigate through the menu that disables the electronic traction control system. Incidentally, the “RR” logo at the center of those rear wheels manages to stay upright during said antics, maintaining a level of civility to the otherwise adolescent proceedings.

Rolls-Royce says the Series II Ghost’s driving dynamics have been tightened, with more responsive suspension and an available Dynamic Driving Package which further trims slop from the handling. They’ve trickled the Wraith’s satellite-guided transmission down to this more plebian model, a system which “sees” the road ahead using GPS data, and shifts accordingly. Though the rush of acceleration from the whisper smooth V12 feels addictively sweet, the Ghost still corners more like a maritime machine than something you’d want to spank on your favorite back road. At least the consolation prize for leadfoots is a seriously sumptuous interior, decked out in acres of finely finished tree and the hides of male bovines raised in high altitudes, for their lack of stretched skin and the absence of barbed wire. Said cabin is filled with gloriously clear sound from the 18 speaker audio system, which includes a so-called exciter speaker in the ceiling.

For all the pomp and circumstance that precedes the Rolls-Royce brand, there are critics who will happily point out that this $286,750 Roller is built on a chassis adapted from the considerably more attainable BMW 7-series. And while slivers of the Bavarian brand’s influence can be found here and there in bits and pieces (like the multimedia interface graphics and some out-of-the-way switches), those traces are surrounded by quite a bit of thoughtful touches, pretty surfaces, and exquisite details. Oh, and there’s also the mercilessly wondrous tug of that big V12 which serves as a not-so-subtle reminder that there’s no amount of demure sophistication that can’t be cured by a good old fashioned dose of speed.