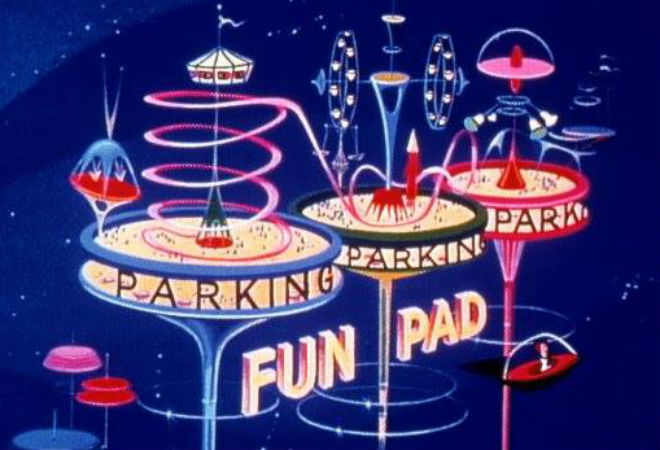 Until those mechanical engineering geniuses in Detroit figure out a way to fold cars to fit into purses or pockets, parking will remain an intractable problem for Los Angeles. One semi-solution is wending its way through the metropolis with the advent of automated parking garages in Santa Monica, Chinatown, and West Hollywood.

The West Coast’s first automated garage, located at Santa Monica-UCLA Medical Center’s new 16th Street building, stows hundreds of vehicles in a space half the size of a conventional garage. But how does it work? Patients and hospital workers drive up to one of six bays and, once the driver exits the vehicle and swipes a credit card at a nearby kiosk, a robotic platform moves the car from the entry bay to an 8,000-pound crane. From here, the crane moves the car to a space on one of six closely stacked levels—these spots are extra snug since there is no chance of “dooring” a neighboring car. Swiping the credit card again will pay the fare and alert the crane to bring the car back to the bay, where it will be reunited with its owner. Users reported a few bugs when the $8 million system opened in late 2012, but human valets helped pick up the machine’s slack. For a better visual, check out this video:

It was an unwieldy hill that convinced affordable-housing developer, Affirmed Housing Group, to add a similar robotic garage to Lotus Garden, their seven-story residential project that just opened in Chinatown. The project’s slanted site on Yale Street made a conventional subterranean garage untenable, so Affirmed added a 17-vehicle automated one that penciled out to $17,000 per stall, a comparable price to a typical underground spot. Downtown News reported that before construction began on Lotus Garden, Affirmed CEO James Silverwood checked out automated systems in Portland, Oregon, and talked with fans of robo garages who appreciated the security of human-less parking, which cut down on dings and scratches, as well as break-ins and vehicle thefts.

City officials in West Hollywood are taking the robo plunge in a big way by building the West Coast’s first municipal automated parking garage: Construction began in March for the 200-car City Hall facility that will feature plenty of bells and whistles when it opens in summer 2015. The three-story garage, with rooftop solar panels, is made of sustainable material constructed from recycled grocery bags, while a public plaza linking it to City Hall will feature an art installation from Ned Kahn. Maybe the most exciting aspect is the garage’s large glass window on Sweetzer Avenue, allowing looky-loos to watch the cars’ merry-go-round. The project cost $16 million, but making parking sexy doesn’t come cheap.