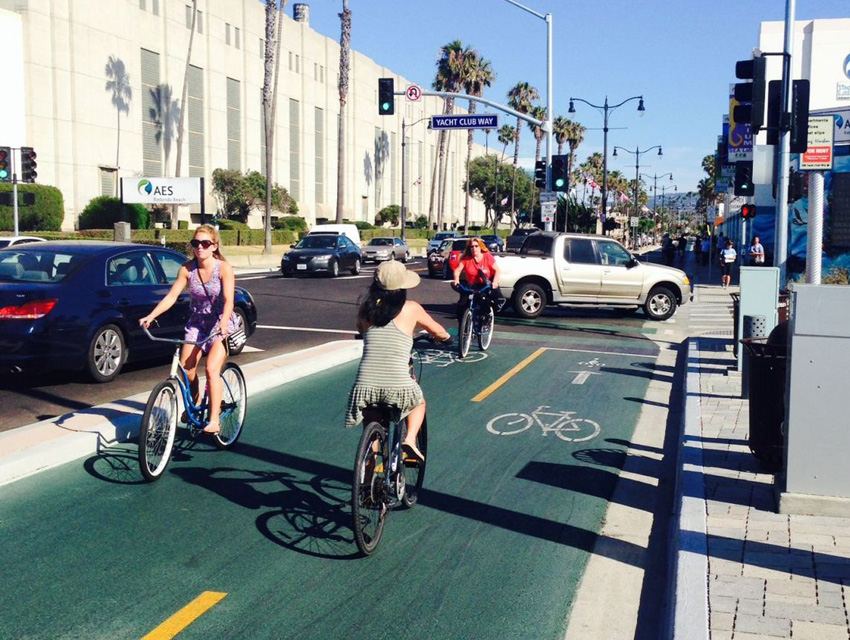 Along with places like New York, Chicago, and Denver, Redondo Beach was honored by the cycling organization People for Bikes in their annual list of the nation’s best new bike lanes.

Redondo Beach’s Harbor Drive project was number 9 on the list of the top 10. People for Bikes called the project “gorgeous” and already “busy”; it officially opened in June, at the height of summer season.

The $4.7 million project, officially called the Harbor Gateway and Bike Path Improvement Project, connected the Redondo Beach Pier with Hermosa Beach’s popular Strand bike path. Herondo Street was narrowed—to the grumbling of some drivers—to make room for the separated bike lane, while shared lane markings were added to Harbor Drive. Parking spaces were made diagonal on Herondo, while both streets were resurfaced and better street light added. A parking lot even became a “parkette,” with landscaping and beautification added.

As People for Bikes points out, “traffic is the curse of almost every beachside neighborhood,” but this project gives people a viable alternative to pre-beach gridlock and parking headaches.