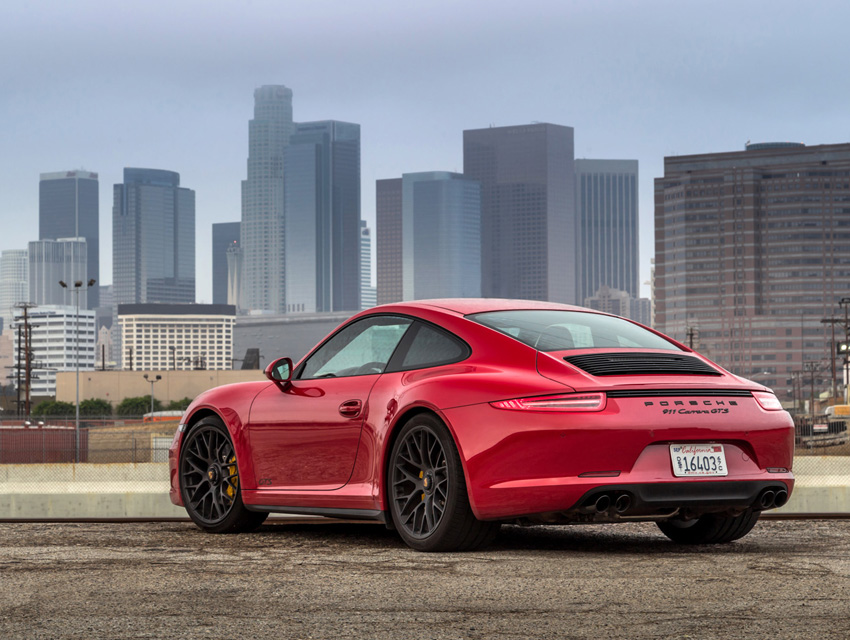 The Porsche 911 is a familiar shape on L.A. roads, a four-wheeled fixture that has seen countless spinoffs of sub-models during its half-century on the planet. The various flavors of 911 have ranged from mildly sporty (“S”) to obscenely powerful (“Turbo”) and downright ludicrous and track-ready (“GT3”). But where do motoring cognoscenti find the sweet spot between saucy and over-the-top? Look no further than these three letters: GTS.

The German manufacturer’s GTS nomenclature dates back to 1963, when the Porsche 904 Carrera GTS managed to whoop ass on the racetrack while also cutting a distinctive swath on public roads. Porsche only built 125 904s, but that model’s lore was strong enough to inspire various GTS spinoffs over the years, including the recent Cayman/Boxster models.

What does GTS mean? According to Porsche, the acronym stands for “Grand Touring Sport,” suggesting a blend of long distance comfort and buttoned-down tuning. The latest member of the family is the 2015 911 GTS, which expands the 911 family tree to 19 models. The 911 GTS can be had in four versions: Carrera GTS and Carrera 4 GTS trim (rear and all-wheel drive, respectively), and Carrera GTS Cabriolet and Carrera 4 GTS Cabriolet trim. These models claim 30 more horsepower, for a total of 430 horsepower. They also feature lower, slightly stiffer suspension, and standard items like Xenon headlights, sport exhaust (which summons a more raucous engine sound at the push of a button), active suspension damping (offering varying levels of stiffness depending on the driver’s mood), and plush, suede-like Alcantara interior surfaces.

Sampling the hardtop and ragtop versions of the 911 GTS on Southland roads revealed a welcoming combination of capability and comfort. Sitting .39 inches lower than their non-GTS counterparts, these cars feel indelibly connected to pavement, communicating the surface below the same way expensive loudspeakers recreate music with clarity and transparency. The 911 GTS is a revelation for those who adore driving; a love song about the relationship between the steering wheel, the road, and the delicately balanced exhaust note of Porsche’s signature flat-six engine.

Surely, there will be future 911 spinoffs that are sportier, flashier, and more capable than the GTS. But as one of the most enduring automotive designs money can buy, the 911 GTS stands as a notable moment in time where the brand’s most striking performance qualities—acceleration, handling, and driver feedback—meet surprising levels of livability. The GTS models are neither race cars nor cushy boulevard cruisers, but Porsche enthusiasts seeking a near ideal balance between driving satisfaction and everyday usability should find those three letters all they need.