Home Uncategorized Peace in the Middle Lane: FAQs About Cars and Bikes Sharing the... 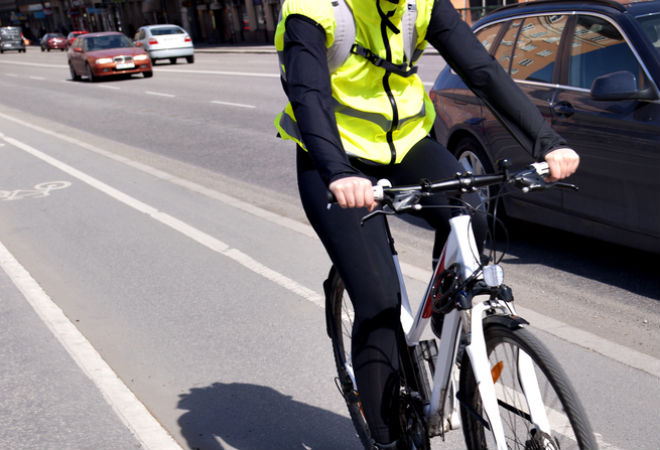 Cycling is on a roll in L.A., with a regional bike share on the way and the CicLAvia festival turning some of our car-dominated streets over to bikes and a few brave pedestrians for a few days a year—just this past weekend, Wilshire Boulevard was transformed into a two-wheeled paradise. The increasing number of bikes on the road is a good thing for traffic and the environment; that is if pedestrians, drivers, and cyclists can all live in harmony. Here are some FAQs that should move us all in the right direction:

What are those street markings with chevrons on top of a bike?
Those are shared lane markings, or sharrows. Appearing on streets from Westwood to San Pedro, the sharrows are meant to direct cyclists where to ride on the road so they don’t get “doored” by people exiting cars parked on the street. When a traffic lane is too narrow to allow cars and bikes to travel side-by-side, sharrows show cyclists the safest spot to travel—that would be where they’re clearly seen by drivers who can pass them carefully. The main impetus for the sharrows, according to the LADOT, which installs them, is to simply alert drivers they’re traveling on a road utilized by many bikes, and to drive accordingly.

Do cyclists need to obey traffic signs and signals?
Yes, people on bikes need to respond to stop and yield signs and obey traffic signals. Cyclists are supposed to use hand signals too, according to the law, but it’s not a very common practice. When bikes are turning left, they’re allowed to get in the left turn lane, just like a car, so give them some space. Bikes can also travel to the left of other vehicles when they’re passing them (e.g., when cars are puttering in traffic).

How much distance on the road should you allow bikes?
Currently, there is no specific buffer required when you pass a cyclist or travel alongside each other (except what is reasonable to ensure safety). That changes September 14, when a bill Governor Brown signed in the fall goes into effect. The Three Feet for Safety Act will require that drivers allow three feet of clearance when passing and, when that much clearance is not possible, drivers must “slow to a speed that is reasonable and prudent” as to not harm the cyclist. Violators will be hit with fines of more than $150, while drivers who break the law and injure a cyclist will be on the hook for at least $220. The legislation was authored by Assemblyman Steven Bradford of Gardena and sponsored by the City of Los Angeles.

Can you drive in a bike lane if no cyclists are around?
No, according to the DMV. There is only one exception: when you’re making a right turn, are within 200 feet of the road or driveway you’re turning onto, and are certain there is no bike traffic around you.

For more on road-sharing safety, check out these driving tips from an L.A. cyclist.