Home Urban Development Is a Parking Revolution About to Sweep L.A.? 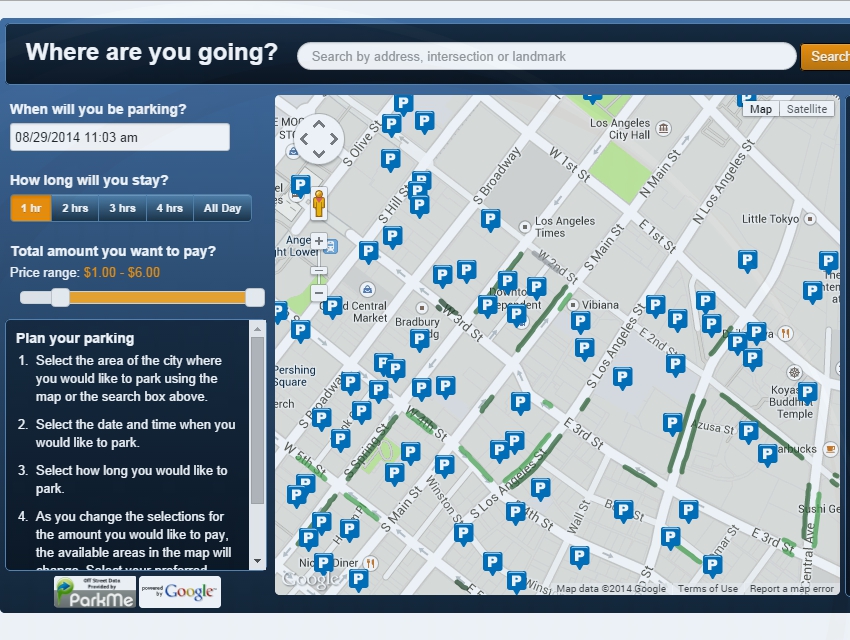 After winning over downtown, the demand-based parking system known as LA Express Park has Westwood Village, Hollywood, and other L.A. neighborhoods in its sights.

LA Express Park is one of those instances where technology actually makes life easier (instead of more complicated); going to the website or via a mobile app, drivers are informed which metered parking spots and spaces at city-owned lots are unoccupied. Wireless sensors under the spaces keep drivers constantly updated, so they can head to a specific space or a cluster of spaces. The benefits are numerous: less circling for spots, which equals reduced congestion and pollution.

The financial incentive is also proving worthwhile. The system adjusts prices to keep up with demand, so that drivers can pay as little as 50 cents an hour at, say Saturday at 8 a.m., or as much as $6/hour at busy times like weekday afternoons. Drivers can pay at the meters or through the various apps connected to the system. That money is flowing into city coffers, and actually saving drivers money over the long-term. Before the program launched in May 2012, downtown drivers were averaging $1.95 an hour; now it’s $1.76.

The system, paid for mostly by grants, was initially a one-year test demonstration, but recently extended to June 2015 after the good reports rolled in. Downtown is now outfitted with over 13,000 spaces connected to LA Express Park’s sensors.

After revolutionizing downtown parking, LA Express Park should bring some parking peace to Westwood Village, which for decades has suffered from a dearth of cheap, available spaces (Hollywood gets the system next year). Don’t be surprised if it soon spreads across the city. Mike Bonin, the Westside city councilman representing parking-poor neighborhoods like Brentwood and Venice, is a fan.

“If there’s not a lot of demand, you can have a low rate and make it easy for people,” Bonin told KCET. “If there’s 10 people vying for the same parking, you should charge a little more. Cost has gone down but revenue has gone up because of peak demand parking.”