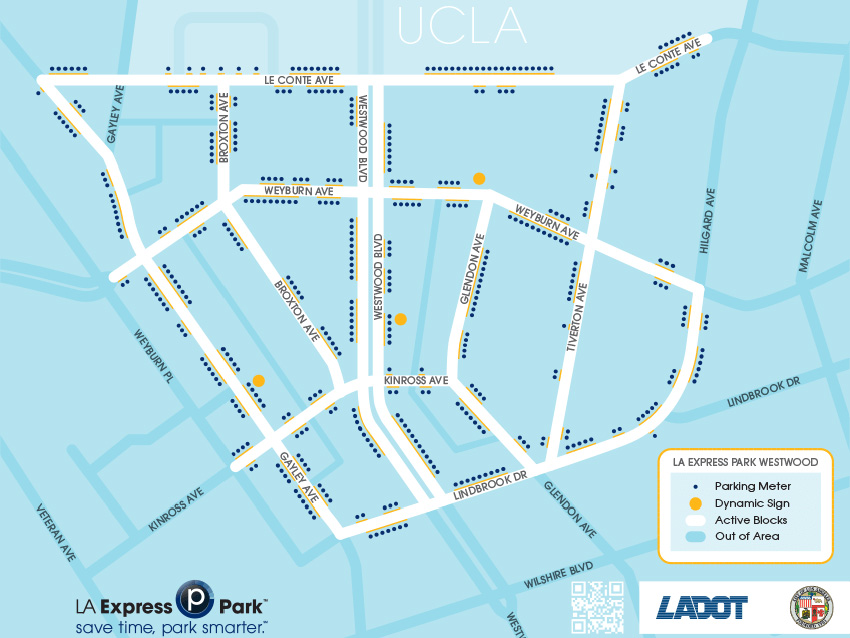 After years of decline, Westwood is on a bit of a rebound with new stores and restaurants opening at a steady pace. Still, the area has a chronic parking issue that drives some shoppers and theatergoers to places like the Westside Pavilion and the Century City Mall.

Just last week though, changes in parking finally arrived in the Village. The LA Express Park system was launched to much fanfare on Thursday, with Councilmember Paul Koretz, LADOT head Seleta Reynolds, and mayor Eric Garcetti cutting the ribbon on the new system. What Express Park offers is real-time “performance-based parking.”

Sensors embedded in the spaces of street parking spots let LADOT know when spots are occupied or empty. With a goal of keeping between 70 and 90 percent of spaces full, the meter prices adjust to demand. Not a lot of cars = not a lot of money to park, and if spaces are mostly full, the hourly rate increases. Day and time also affects parking pricing.

While the smart spaces should help city coffers, how will it aid drivers? Well, three electronic message signs (on Weyburn, Westwood, and Gayley) will alert drivers to available spaces, according to Streetsblog.

The system has already launched with 6,300 spaces in DTLA, and Westwood is now adding 500 curb spots. Hollywood, Venice, and the neighborhood surrounding USC could be next.