Home Dining Chefs and Restaurateurs The Owners of La Dolce Vita and Mélisse on the Intersection of... 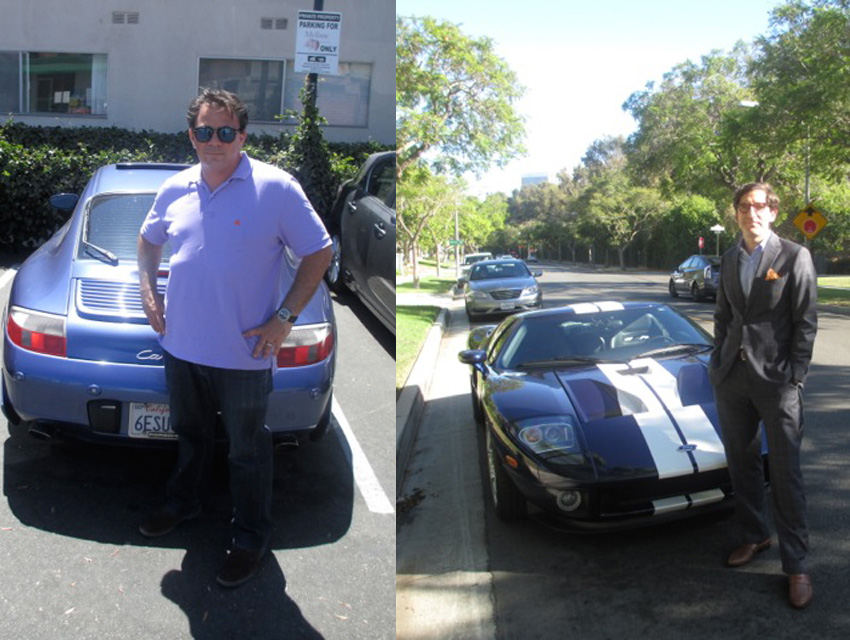 A love of cars isn’t a prerequisite for working in the food business, but it doesn’t hurt, especially if you’re based in Southern California. Recently, I had a chance to spend some time with two men behind the perennial SoCal favorites, Alessandro Uzielli (pictured right), owner of La Dolce Vita in Beverly Hills and Josiah Citrin (left) of Mélisse in Santa Monica.

Both Al and Josiah have a fastidiousness nature, which makes for an excellent restaurateur, as a love of the deepest ephemera of restaurants—plates, wall coverings, produce—all help to make the ineffable.

Eat at either restaurant, the recently made over La Dolce Vita, a traditional Beverly Hills Italian mainstay since the 1960s, or Mélisse, that Westside paragon of French Haute cuisine and you’ll see a deep and abiding love of food, service, and mise en place.

Al’s love of cars come from his family history as he’s the son of Anne Ford and Giancarlo Uzielli and a direct descendent of Henry Ford himself. Al still works for the Blue Oval as the head of Ford’s Global Brand Entertainment and showed up to meet me in his fantastic 2005 Ford GT.

As we drove around the flats of Beverly Hills, Uzielli explained that it was his childhood—his father was a New York City restaurateur—that really inspired his love of food and, through a quite circuitous route, led to his stewardship of La Dolce Vita in 2003. It took only a short while for the restaurant to regain its footing thanks to, of all people, Tom Ford hosting an event at the restaurant. As Uzielli rowed through the gears in the stop-sign heavy Flats and talked more and more about La Dolce Vita, you could tell his love of food is just as strong as for autos.

Uzielli and I discussed the crossover between the two divergent worlds, which lead to a longer conversation discussing about how changing the menu at La Dolce Vita into a more modern, farm-to-table fare was akin to Ford’s new, more Gen-Y friendly models.

Over sparkling water and coffee at La Dolce Vita, Uzielli said, “When I was child, the Ford name meant family and it was just that, my family. Henry Ford II was my grandfather. But I didn’t really understand what the implications or ramifications of the name until I got older. It was only when I was older did I really understand what the Ford name meant. I also saw my father build four of five successful restaurants around New York City—he was very much a bon vivant—and when they started to close, I swore off restaurants for a while. But I realized it gave me a love of food, but more than that, it gave me a love of experience, a love of going out. That’s what lead me to La Dolce Vita.”

Josiah Citrin of Mélisse came to food and cars the same way as Uzielli; they both ran in his family. It was Citrin’s French grandfather that both gave him his first car as well as his abiding love of Gallic cuisine.

Citrin, who spent many a year working and training in both France and in some of the finest restaurants in Los Angeles, starting with West Beach Café in Venice in 1986. Citrin, who grew up in Santa Monica and Venice, “when Santa Monica still had bad parts of town,” was always as much into cars as he was into food, perhaps more so.

His cars followed a similar trajectory as his vehicles—the more elaborate restaurant and platings—Chinois on Main, Granita, Patina, JiRaffe—the more elaborate the cars, culminating in a collection of powerful German sedans, like the BMW 7-Series and Mercedes-Benz S-Class.

Fifteen years ago, Citrin opened Mélisse and a few years later, he treated himself to a Porsche 911 Carrera. I took Citrin for a ride in a 2014 McLaren 650S through the streets of Santa Monica on a recent morning, and we had a long talk about Mélisse: “I wanted it to be traditional French food, but the one thing I didn’t want was for it to be stuffy. I’m a surfer dude from Santa Monica, I wanted it to be welcoming but still be polished and professional.”

Which is a great way to describe the way Los Angeles likes to eat and drive today.