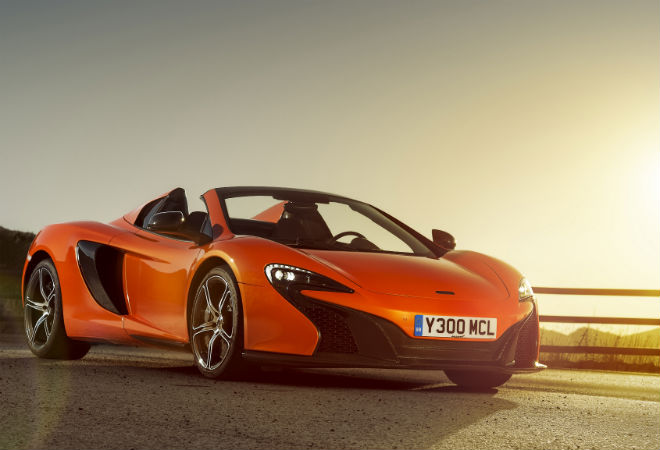 Thanks to their early roots in racing, the world’s great car brands are intrinsically associated with signature colors. Porsches are iconic in silver, Jaguars are evocative in British Racing Green, and Ferraris are emotionally linked to Rosso corsa—aka, “racing red.”

And then there’s McLaren.

While famous in racing circles, the British brand is a bit of an outlier in the exotic car world. The manufacturer savored a slew of wins in the ruthlessly competitive realm of Formula 1 racing, but with only four road going models to company’s credit, is a plucky new kid on the high-end sports car block.

That said, McLaren’s storied past (and its associated colorway) play a powerful role in reinforcing the brand’s street cred among the microcosm of moneyed supercar consumers—and is why you’ll always see McLaren models available in several shades of orange. McLaren’s signature orange debuted in 1967 to “pop” on American television sets, and the hue—later dubbed Papaya Orange—became instantly recognizable to hardcore race fans, standing out in the field of primary colors with its own succulent shade.

During the press launch of McLaren’s latest six-figure toy in Andalusia, we had the pleasure of meeting Anna-Louise Clough, the person responsible for selecting the brand’s colors and surface treatments. Clough is a soft-spoken designer-y type, about as far removed from the rough and tumble world of high dollar car manufacturing as you could imagine. She’s much more likely to describe the characteristics of aluminum flake paint—from a fine, silky, liquid-metal finish to larger, “crunchier” metallic and xirallic microtextures, which create tiny, rainbow-like glints—than she is to rattle on about engine outputs and power-to-weight ratios. Which we love.

A graduate of automotive design from Coventry University, Clough is gravitationally drawn toward color and texture. Case in point: The first time I met her, she was carefully inspecting pink wisteria the hotel garden. “I research a lot of architecture, fashion, and product design,” she later told me. “I’m like a little sponge just absorbing everything that’s going on.” The sensual acuity makes her ideally suited to McLaren’s design studios, where she makes it her business to fine tune the brand’s modernist aesthetics and ensure they have their finger on the pulse of the moment via its off-the-rack color palette (which currently consists of eighteen hues). She also manages the MSO (McLaren Special Operations), a custom-order service that enables customers to match their vehicle to their nail polish or shoe color.

So strong is the cultish fanaticism for Papaya Orange among McLaren fans that one customer special ordered an exterior and interior completely decked out in the shade— from the roof and air vents to virtually every touchable surface. “We told him that reflections could be an issue [from the bright colored surfaces],” Clough says, “But he was quite happy to wear sunglasses.” The customer’s sole concession? The carpet, which McLaren advised should be black in order to ground the sea of orange.

Equally as important as creating new and exciting colors for the brand’s supercars (which can run in excess of $1 million) is ensuring that fresh shades of orange keep the brand’s past alive. Clough agrees that updating McLaren’s range of available colors sometimes feels like maintaining a household of children—with orange as the perennial favorite. “When somebody needs a holiday and a bit of a refresh… it’s fun to see the [old and new] colors next to each other,” she says.

As for McLaren’s ever evolving hue, Volcano Orange was recently complemented with a new shade called Tarocco Orange, which skews a tad towards the yellow spectrum and gives the radically styled 650S and 650S Spider models a decidedly different road presence. The shade lends McLaren’s offerings a more refined and contemporary feel across the board, offering an aesthetic upgrade that mirrors the performance improvements that have swept across the brand’s product lineup.

While breakneck technological advances are sure to create wilder, quicker, and better handling supercars, creative forces like Anna-Louise Clough will ensure that in the future, they look every bit as fast as they drive.