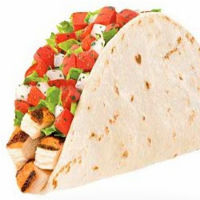 When you’re motoring across town from home to office, meeting to movie, you’re bound to get hungry, having forgotten to factor a lunch break into all that traffic. The problem is where to grab food in five minutes’ time that you can consume behind the wheel (without using your elbows to steer), and that won’t bring on a bout of 1000-calorie induced shame every time you see the wrapping on the passenger-side floor? Next time your stomach’s grumbling louder than your engine, try these health-conscious picks: Gaby’s is an L.A.-exclusive chain, lucky us. Though not all the locations have drive-throughs, the counter is quick enough to grab a wheel- and stomach-friendly meal in a jiff. We like the pita wrap sandwiches, the falafel pita, and the chicken kabob pita. Gaby’s doesn’t post its nutritional info, but trust us, it’s got plenty of decent options. Photograph courtesy gabysexpress.com. Breaking news: Astro Burger isn’t just for burgers! They have a surprising Greek menu with delicious dolmas. The small, spiced, rice-stuffed grape leaves are the perfect finger food for eating in the car. Astro Burger also has a reliable vegetarian menu, which includes the Mother Nature Sandwich. A hefty dose of sprouts, tomatoes, avocado, carrots, and lettuce on wheat bread will leave you feeling full, svelte, and prouder than Jared from Subway brandishing those old size-60 pants. There’s only one location, in Hollywood, but if you’re in the area, and in a rush, it’s your best bet. It’s shaped like a drive-through, but is actually counter-service only. Don’t worry—it’s fast! Photograph courtesy shutterstock.com. Tacos are obviously ideal for driving because they come in their own edible to-go wrap. Taco Bell has something called the Fresco menu. That means health(ier). Our favorite is the Fresco Chicken Soft Taco, which weighs in at 140 calories, and 3.5 grams of fat. It won’t have that oozy goodness of a regular chicken taco, but it won’t load you with guilt, either. Photograph courtesy tacobell.com. You know MorningStar! You probably have a carton of their veggie burgers buried in the back of your freezer. But since you’ve forgotten about those, drive through a Burger King, and order one of theirs. Leave off the mayo, and it’ll come to 390 calories and seven grams of fat. (The mayo adds nine grams! Not cool, mayo.) Photograph courtesy bk.com. Noah’s Tuscan Chicken Pesto Sandwich is made with what they call a “thintastic” bagel. That’s right, it’s a skinny disc of a bagel that boasts a mere 140 calories (versus 240 for a regular bagel.) Noah’s doesn’t have any drive-through locations, but with its counter-service, and penchant for strip malls with parking lots, you can zip in, grab your bagel, and go. Photograph courtesy noahs.com. Zankou Chicken has a handful of locations in Los Angeles. With many healthy options on the menu, their wraps are the most commuter-friendly. The Tarna wrap is marinated chicken with tomatoes and garlic sauce in a warm pita. Delicious. (And fragrant—you’ll smell it in your car for days. Eau du pollo.) Photograph courtesy www.zankouchicken.com. The only healthy options at McDonald’s are the calories you can burn running away. Even the Premium Southwest Salad with Grilled Chicken, at an un-characteristically low 290 calories, contains 650 mgs of sodium and 70g of fat. Run. Away. Photograph courtesy shutterstock.com.