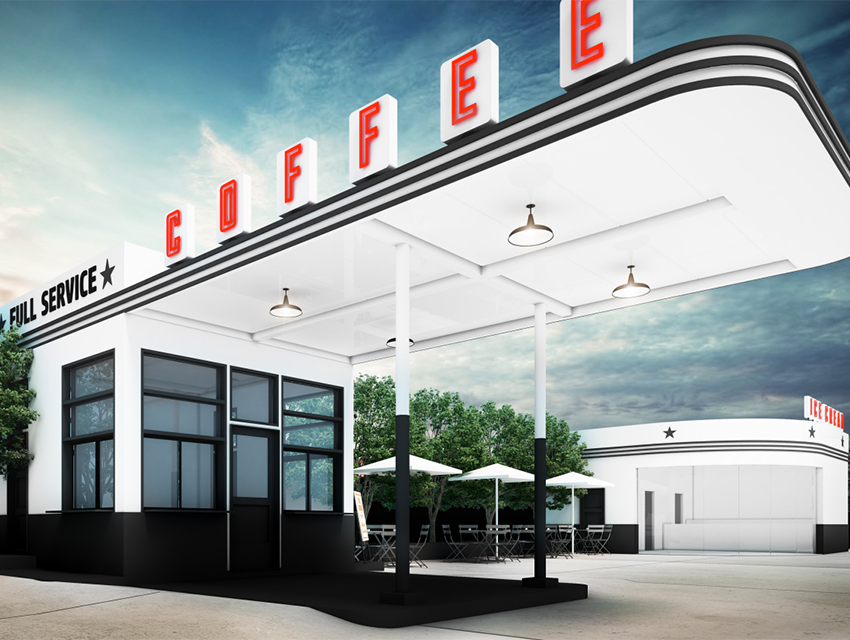 Everything will be obsolete one day (just ask the internal combustion engine). Here in LA, gas stations—once an ubiquitous image in this city—are noticeably creeping toward that inevitable fate.

All over, gas stations are being bulldozed to make way for new mixed-use apartment buildings in growing neighborhoods like Hollywood and Koreatown. There are many factors in play—the city’s getting bigger and denser, more young folks are driving less or relying on transit, bikes, and ride-shares to get around, and cars are becoming more fuel-efficient.

Preservationists usually don’t bat an eye when a gas station meets the grim reaper, since most are cheap and forgettable (and certainly don’t add to the pedestrian experience). Some developers, though, are repurposing gas stations—usually older versions that offer a bit more charm—as a cheaper alternative to the knock-down-and-rebuild model.

Plans are in the works to turn a 1941 moderne-style Texaco station in Koreatown into an independent coffee shop. When it opens in the fall, Full Service Coffee Co. will offer a coffee stand with to-go service and outside seating. The old Texaco has been shuttered for years—it hasn’t actually dispensed gasoline in over half a century—serving as another blight on the neighborhood. This area, which straddles both K-Town and East Hollywood, is in dire need of a community spot, and the nostalgia factor should only add to the coffee shop’s appeal.

The old-timey art deco novelty of the 1935 Gilmore Gas station on Highland Avenue certainly contributed to its successful second life as a Starbucks outpost. After the Seattle chain cleaned up the charming star-shaped structure and reopened it in 2015, the reception has been laudatory. So, there you go. Gas stations are located in places high numbers of people drive by every day. Coffee shops are a natural replacement.