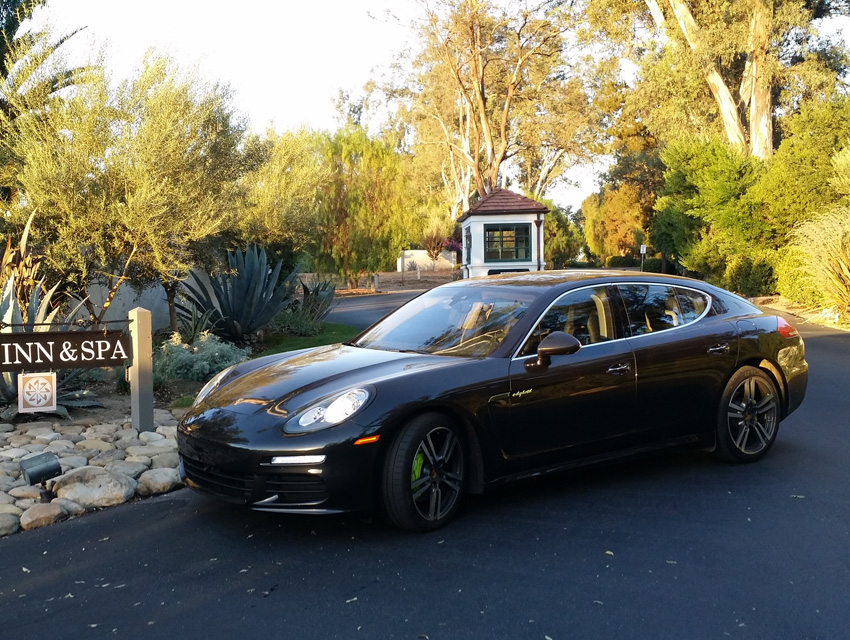 All professional car writers have a favorite road, somewhere near and dear to them. For the Gentleman Journalist, this road so happens to be in the somewhat undiscovered and bucolic hamlet of Ojai, nestled about 12 miles from Ventura and about 80 miles downtown Los Angeles. While it may be a serious schlep for the average Sunday driver it’s, as Michelin says, “…vaut le voyage” or worth a special journey, especially if you have something exceptional to drive, as there are great roads, great food and, if you are so inclined, nice places to lay your head.

Ojai feels like a different kind of California – an older version maybe from the 1920s or ‘30s. It’s that quaint charm that entices me to come back a few times a year; sometimes to rent a house, sometimes for a stay at the Ojai Valley Inn, which has been a mainstay in the valley since the 1930s. It’s a perfect throwback to a slower time in California, a place where you can sit under a giant oak tree and while away the time. The Inn recently underwent some food and beverage updates too — all for the better.

I’ve been staying at the Ojai Valley Inn since I was a kid and a few times when Mr. and Mrs. Gentleman Journalist drive up to Ojai, we usually spend a few days walking around the wonderful Wallace Neff-designed buildings, hitting buckets of balls at the driving range, and generally relaxing. Oh, then there’s the burger at Jimmy’s Pub, who’s menu has been reworked by young, new Chef de Cuisine, Jaison Burk, who has a farm-to-table mentality not previously seen at the Inn.

It was on a hot late-September afternoon where the temperatures reached triple digits,that a long drive was commenced and my destination mapped out. The plan: A circuitous route from LA. to Ojai, where I would recharge the car and rest my weary head at the Ojai Valley Inn, followed by a next morning longer drive on one of the best and usually most empty road in Southern California, the 33/Maricopa Highway up past Wheeler Gorge and Sespe Gorge and on to Sagebrush Annie’s, a cute ramshackle winery and restaurant about 50 miles north of Ojai in Ventucopa, and then back to the Ojai Valley Inn for a burger and beer at Jimmy’s Pub. Not a bad deal at all.

The car was a brand new 2014 Porsche Panamera S E-Hybrid, a Carbon Grey Metallic masterwork from the boys in Stuttgart. The E-Hybrid separates itself from other hybrids by the fact that it’s a) a plug-in and b) it can cruise on electric power alone for up to 22 miles, which is pretty dang amazing, if you think of it.

At that range, you can take Mulholland from your house in the Canyon to Warner Bros. and back on one charge with a few electrons to spare, if you’re a tad bit frugal with the gas pedal. With a base price of $99,000, and $128,505 as tested, it makes a great cross shop with a Tesla. For my money, I’d rather have the Porsche any day of the week— because, well, Porsche. The Panamera has quite a few different driving modes, from pure electric to pure sporty gas to a combination of the two. Also, a few years into the product and the Panamera no longer looks ungainly to the eye, it’s now settled into middle-aged conformity with a deeply masculine look and feel. If a car resembled late-period Brad Pitt, there you have it.

The Panamera S E-Hybrid handled well on the twisties of the 33 – it is a Porsche after all – and despite the hot, hot heat, I was able to cruise for a large portion of the drive on battery power alone, which was pretty dang awesome and very futuristic. In the car, with the temps breaking triple digits outside, the Panamera, nice and frosty and incredibly quiet, I thought to myself, If only everyday was like this. I quickly had to remind myself, that’s what it’s called a vacation.