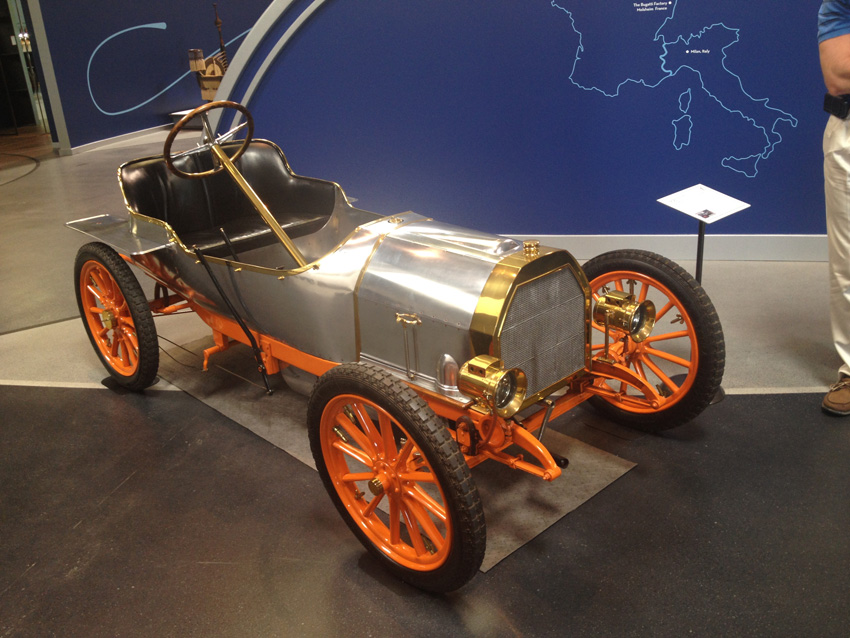 The current exhibit at Oxnard’s Mullin Automotive Museum, “The Art of Bugatti,” is not just pleasing to the car-loving half of your brain. By pairing kajillionaire car-enthusiast Peter Mullin’s extensive and expensive collection of gorgeous cars with details of the Bugatti family’s eventful, and often tragic, history, this exhibit will also appeal to the same part of your brain that enjoys binge-watching Downton Abbey. Period cars and juicy rich people drama? Fetch the car, Mr. Bates.

Southern California is the perfect location for this exhibit: The American Bugatti Club was founded here in 1960. Cruising to the museum presents the perfect weekend drive—ignore GoogleMap’s insistence to take the 101 and slink along the PCH instead. Enjoy the sun and sea on the way, and then plan on re-hashing stories on the way back. You know how you better understood the complications that World War I brought to British aristocracy after poor Matthew got his legs blown up on Downton? This exhibit will make you feel equally knowledgeable. For instance, did you know that Ettore Bugatti, the engineer who opened the family-named factory in 1909, originally studied art? He began focusing on designing cars after seeing the art work of his brother, Rembrant, and admitting that he’d never be as talented.

Virtually all members of the extended Bugatti family were artists, which the Mullin Museum showcases seamlessly. Rembrant’s bronze animal statues stand next to Ettore’s race cars and their father Carlo’s homemade furniture. Though the men didn’t share an art form, they certainly had obsessiveness in their DNA: Rembrant practically lived in the Antwerp Zoo in Germany, carrying his supplies with him everywhere and creating statues in real time. If, by the zoo’s closing time, his work wasn’t to his liking, he destroyed the product and started over the next day. Carlo’s chairs are painstakingly asymmetrical and his work with silver looks fit for royalty. Ettore’s impeccable designs got Bugatti noticed by wealthy people in the market for fancy cars, and his diligent business tactics landed him contracts that jump-started his career and legacy. Don’t you feel more prepared for Jeopardy! already?

“The Art of Bugatti” doesn’t tiptoe around the family’s dark days. The world wars tolled heavily on the Bugatti brothers. All of the animals in Rembrant’s beloved Antwerp Zoo were put down in 1914 as a result of dwindling resources, and within two years, Rembrant took his own life. After allowing the Germans access to the Bugatti factory during World War II, Ettore’s reputation and health were ruined. The exhibit pairs this information with a display of the last car Ettore ever designed—a sweeping black funeral on wheels. Mullin and guest-curator Brittanie Kinch’s presentation of the Bugattis’ art and their major life events is memorable and interesting, even to those who arrive to the museum with minimal car or history knowledge.

There are other notable displays of things borne of the Bugatti legacy after the deaths of its founders. One is a car that looks like an artifact fished out of the wreckage of the Titanic. Eerily beautiful, it’s actually a 1925 Bugatti Type 22 that was dumped in a Swiss lake after being won in a poker game. The lucky winner couldn’t afford to pay taxes on the car and decided if he couldn’t have it, no one could. Ettore’s daughter, Lidia, true to her artist genes, became a painter, and her work is also worth checking out: she creates figures that are half-car and half-person, like automotive minotaurs.

“The Art of Bugatti” will be around until next March, but worth a visit while summer is still in the air. Buy tickets here, and when you get there, be sure to talk to the museum’s docents—they know even more details about Bugatti’s legendary drama than the walls.