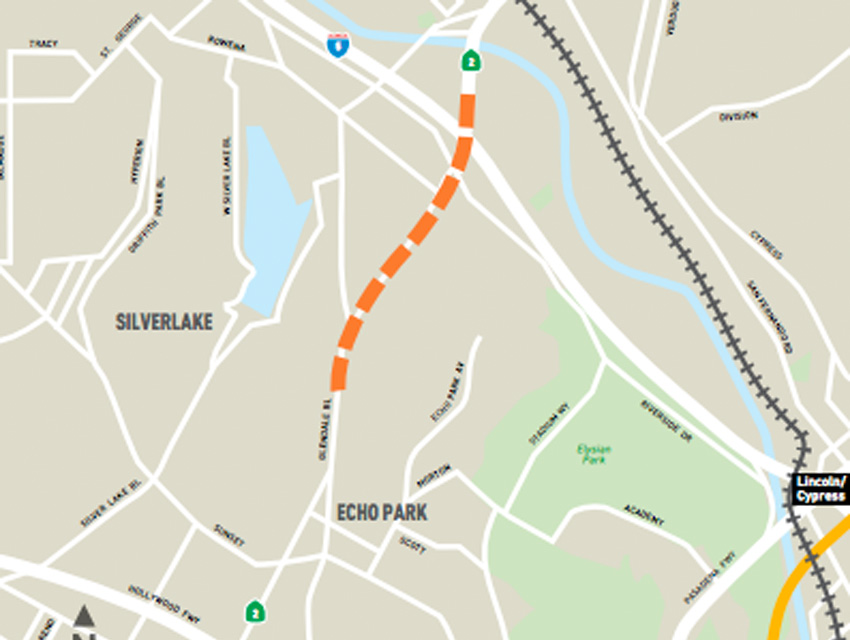 Residents of Echo Park and Elysian Park are hopefully rejoicing at the news of work beginning on the latest phase of Metro’s State Route 2 Terminus Improvement Project. Construction first starts on 2,000 feet of soundwalls near the southern terminus of the 2 freeway, according to Eastsider LA. The soundwalls will be on the northside of the 2, as Echo Park and Elysian Park communities were cool with them, while Silver Lakers said nyet to southbound walls.

For anyone familiar with the area, the 2 ends abruptly in Echo Park—since residents years ago objected to connecting that freeway with the 101—and dumps cars onto a stretch of Glendale Boulevard that often feels like a freeway (if it’s not completely backed up). Metro’s plans will address the speedway conditions with a meter to slow down traffic. Meanwhile, soundwalls, ramps, and sections of Glendale Boulevard will get covered in vines and other tasteful, drought-resistant landscaping.

“Landscaping will both improve the aesthetic look of the area around the Terminus and signal to drivers coming off the freeway that they are leaving the freeway and entering a community,” according to Metro. Look for added pedestrian amenities like new streetlights on Glendale Boulevard from Branden to Waterloo streets, and an extension of the median on Glendale  to Allesandro Street. Sidewalks improvements, including a widening on the westside of Glendale, are coming, as well as repairs to ramps for the handicapped, clearer crosswalk markings, and new lighting under the Glendale Boulevard bridge.

Why the Highway Administration Is Agonizing Over Fonts