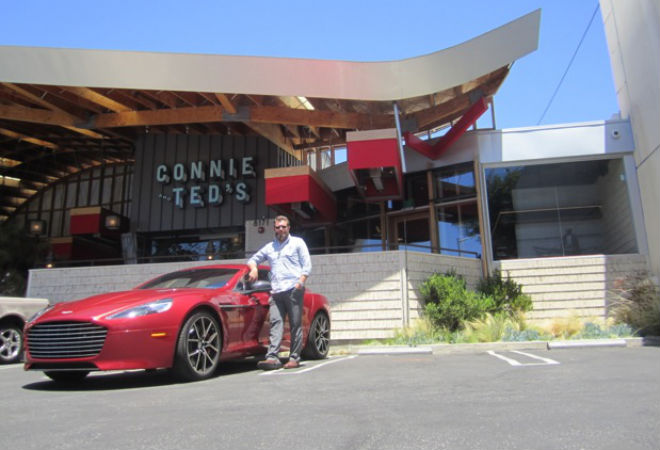 In Los Angeles, we are just as obsessed with what’s in our driveway as with what’s on our plate. Since I don’t allow eating in my car, I figure driving around the city’s most influential chefs is the next best thing. This week, I picked up Michael Cimarusti, the man behind the ingredient-driven freshness at Providence (the magazine’s #3 pick for 75 Best Restaurants) and the East Coast-inspired clam shack Connie & Ted’s (which notably made the list at #70).

Cimarusti is a gregarious man, with an infectious laugh and humble demeanor, especially when it comes to discussing his success, which is as outsized as his personality. There are few chefs in Los Angeles today that are cooking at such a sustained level of excellence, while we could—and did—discuss food all day, I wanted to see what drove Cimarusti. Literally.

The plan was simple: take a tour of the under construction Providence and then drive downtown to Mutual Trading Co to pick up a few knives and back to Connie & Ted’s for lunch, with me acting as Cimarusti’s chauffer for the day. Fortunately, he sat in the front seat.

I selected a brand new 2014 Aston Martin Rapide S, an ultra-luxe four-door coupe powered by a 6.0-litre V12 engine with 550bhp that comes standard with more British quirks than a Mr. Bean movie, for our busy day. The Rapide S we drove had a lovely Volcano Red exterior with a black interior and a base price of $199,950.  Of course, like add-ons to a prix fixe, there were a lot of options, like red brake calipers at $1595 and exterior carbon package at $7570 and some sweet 20” 10-spoke Gloss Black wheels at $4920 for the set. Total price-as-tested: $222,815. It definitely drove like it cost that much and turned more heads than a plate of sizzling fajitas at Chili’s—or a bowl of chowder at Connie & Ted’s. I never considered myself an Aston Martin man, but, after spending a week with the car, I do now. “Whoa, that’s beautiful,” Cimarusti said when he got into the car. The engine came to life and we rolled down Melrose Avenue, the sound of the sport exhaust and 12-cylinder engine—a bellowing thunderclap of what I can only describe as love—filling the leather and carbon fiber-decked cabin.

While we didn’t have much time or space to open up the Aston Martin together—thank you, L.A. gridlock—we did have a chance to discuss Cimarusti’s automotive past and how it affects his day-to-day life over a nice long lunch at Connie & Ted’s. Cimarusti divulged it was the first time he had had a proper meal at one of the tables.

Of course, I let him order: fried clams with bellies, dozens of various oysters, a gaggle of Lobster Rolls, stuffies (!), a plate of raw clams (one of Cimarusti’s favorite items on the menu), a giant platter of cookies, and a special iced coffee, which Cimarusti ordered by saying to the server, “I want what you drink at the beginning of the shift, you know with the milk and ice.”

Cimarusti told me his lifelong love of cars has influenced his cooking, his technique and the way he runs his business. Below are the highlights from our long conversation.

­It all started with a Lincoln:
“I have a very distinct memories driving up in Connecticut with my father when I was twelve years old to buy a 1956 Lincoln Continental Mark II. When my father was a little kid growing up in Brooklyn, he saw that car in the dealership and said, ‘One day, I’m going to have one of those.’ We bought the car and drove it back home to New Jersey. My dad’s a PhD chemist and knows nothing about cars—he just knows what he likes—and he put the car in the garage and systematically took it apart piece by piece and over thirty years he found parts from all over the country and put it back together.”

Cimarusti based his business model after car maintenance:
“In my dad’s garage, there were plastic bags and Styrofoam cups filled with parts and everything was labeled with parts numbers and all had a place. I told someone once, the food at Connie & Ted’s is very naive, it’s simple food and you bring it to the table in the simplest way possible, but that its not easy to do. We do it the hard way at Connie & Ted’s. We break everything down; it all comes in whole. We do all the work in the kitchen.”

He actually loves the 110:
“Dad’s car was great, but my very first car was a complete piece of shit: a 1973 Oldsmobile Omega and it wasn’t until recently that I bought a car I really love, my 2012 BMW 535 M Series. I really love the BMW. One of the best things about living in South Pasadena is the 110 freeway. I love that freeway, I know every curve. The drive gives me time to think about the menus and what I’m working on too.”

He insists he will someday own his dream car:
“My dream car is a mid-1970s Porsche 930 Turbo. The reason I am so deeply in love with that car is the guy who used to take care of my cars when I was a kid had a green one with the big letters in the side that said Turbo and the lettering wrapped into the whale tail. I could conjure up an image of that car anytime I want because I fell in love with the 930 when I was sixteen or seventeen years old. One day, I’ll get one.” If Connie & Teds and Province each had to be a car, what kind would they be?
“For Connie & Ted’s, it would be something American-made, maybe the new Chevrolet Corvette Stingray, because it’s all about a nod to the past and also fits right in the modern day. It’s big and it’s fun and it’s loud. For Providence, it might be the 930 Porsche Turbo I’ve always wanted because it’s something that I’ve been dreaming about for a long time and it’s something that is really, really important to me. The 930 is high design and it’s beautiful and but there is nothing unnecessary or superfluous about it. It’s just serious and it performs at very high level. That car is about old school power and it performs really well with out a lot of the modern technological advantages that are available today. That’s what Providence is, it’s just a simple restaurant, almost like a mom and pop shop. It just is.”

Food culture creates the same level of obsession as car culture:
“There are a lot of people in food who just love their cars. There are a lot of people who need to collect food experiences – they need to eat at that place in Taipei or they need to go to this place and car culture is the same way; they have to have the best or find something out of the way. There are a lot of similarities, but food in a restaurant, the experience is so ephemeral—it’s here, then it’s gone and you’re left with the memories of it—but with cars it’s something you’ll have for years, maybe the rest of your life, so the connection may be deeper.

People really fall in love with food. It may be a certain kind of food, it may be the food of their grandmother, maybe it’s fine dining, maybe it’s this kind of seafood, and it’s like with cars, it’s the same. You may be a Porsche guy, or a Lamborghini guy, or an Aston Martin guy, or maybe you fall in love with a make and model, a type of car and, really, that’s just like with food.”