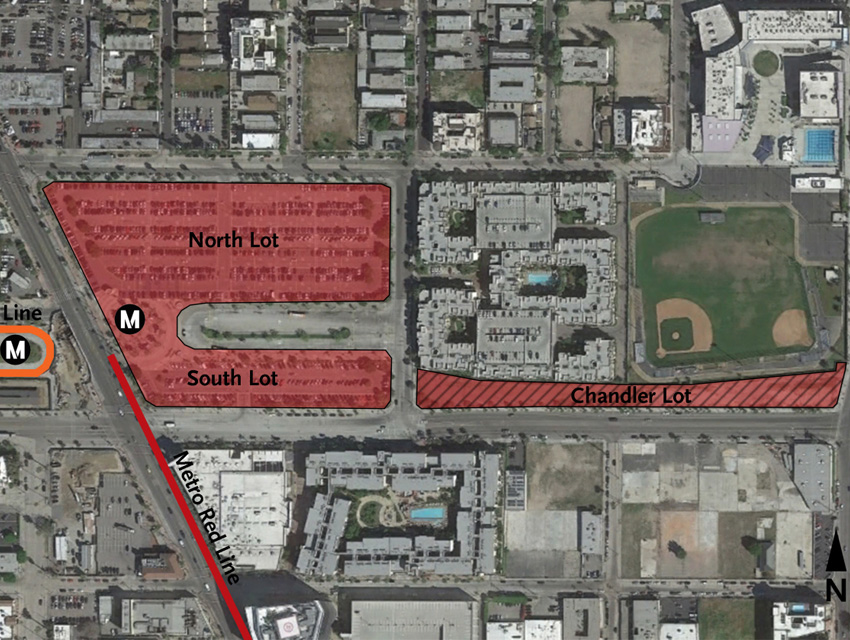 Arriving at the North Hollywood Red and Orange lines by car is a tricky endeavor during the workweek; oftentimes the adjacent parking lots (with nearly 1,000 spaces!) are completely fully, leaving many commuters to forego the train or bus and instead drive to Hollywood or Downtown.

On Monday, Metro opened up 194 new spaces on a lot on the northside of Chandler Boulevard, between Fair and Vineland avenues, just a short walk from both stations. The spaces, like all parking near Metro stations, is currently free, though Metro is studying whether it should begin charging for their use.

Working with a $1.4 million budget, the transit agency paved over a former unused lot with permeable, temporary materials. Metro is emphasizing “temporary” on its website; the agency is hoping to develop the parking lots that surround the NoHo stations and eventually develop mixed-use buildings (some have already sprung up in this part of town). Even though the parking lot would be easy to remove should a development deal emerge, it still includes LED lighting and, possibly at a later date, charging stations for electric cars.

The agency is taking some blowback on their decision to incentivize car travel to their stations. Metro is emphasizing that the new parking lot includes a walk way and bike lane that connects to two other bike paths, and that the parking lot is serving a greater purpose than its former incarnation.

“The sustainable parking demonstration project is not only about parking, it’s also about making better use of space around our stations,” Metro CEO Phil Washington said in a statement. “What was previously an empty piece of land is now being used to make transit more accessible while acknowledging the potential for future transit-oriented growth in this vibrant community.”