Home Art An Early Look at All the Artwork Coming to the Metro Crenshaw... 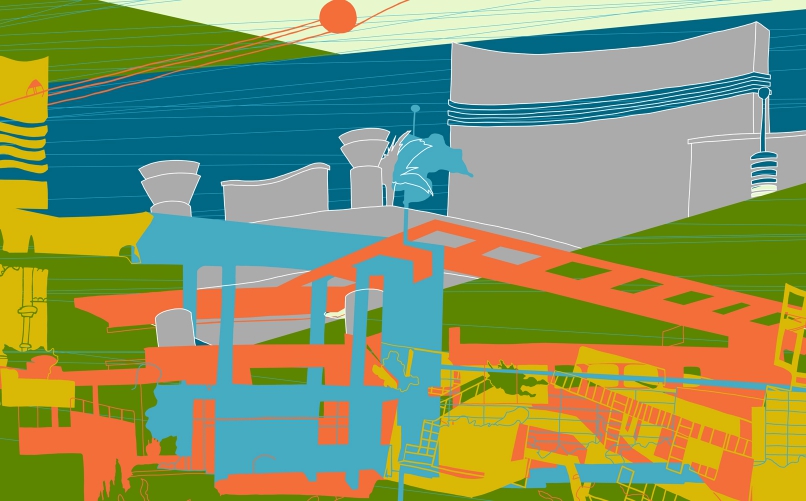 An often unheralded aspect of a new L.A. rail line is all the public art it brings with it. Metro devotes a percentage of its construction budget to commissioning work from artists who’ll embellish each station with their vision.

The Crenshaw Line—which will connect the Crenshaw District, Hyde Park, Inglewood, and Westchester beginning next year—is no different. Stations are now sprouting up along the 8.5-mile line and it won’t be long before art is added above and around the platforms.

Here’s a sneak peek at the works coming to eight stations (a ninth stop connecting to a forthcoming LAX people mover will open after next year’s ribbon cutting), along with details on the artists and the concepts behind their work. All images courtesy of Metro.

This underground station—which will serve as a transfer point between the Expo and Crenshaw lines—has three different artists working on it. Erwin Redl is designing the street-level subway entrance, which pays homage to the gorgeous West Angeles Cathedral across the street. Stained glass depict sunbursts, with colorful ground reflections during the day, while the piece will glow like a “jewel box” at night.

Rebeca Méndez is working on the concourse level, building two wall mosaics that will measure over 10 feet tall. Depicting images of the sky that Méndez photographed over a 24-hour period, the mosaics will help reorient subway riders to the bright California sunshine.

Meanwhile on the underground platform level, Jaime Scholnick recreates the community above with slice-of-life imagery that was informed by local community input and thousands of self-taken photos.

Between the street and trains, Shinique Smith used a scrapbook-like style that draws from many cultures and features the words of the station’s namesake hero.

Eileen Cowin‘s platform work is some of the most distinctive on the line, using photography that will tell 14 “filmstrip-like stories.”

This subway station is located in the heart of L.A.’s African-American community. For the glass entrance pavilion that sits next to historic Leimert Park, Ingrid Calame focused on rubbings taken from nearby doors, signs, and architectural details of buildings. Local youth helped Calame produce the markings.

On the concourse level, Mickalene Thomas found inspiration in the city’s sunshine, reproducing iconic local landmarks like the Vision Theatre, LAX’s Theme Building, and the fountain at Leimert Park in a clean, eye-catching, Pop Art-esque style.

Deanna Erdmann‘s work is found on the platform level, where the full-time Metro user decorated the waiting area with nature-imbued photographs that highlight the greenery found directly above at Leimert Park and the cultural richness that surrounds it.

Carlson Hatton took many walks around this South L.A. neighborhood to help construct his piece, which serves as a visual manifestation of the music he heard emanating from apartments and homes, as well as the area’s vibrant drum line tradition and band scene.

L.A.-based artist Kim Schoenstadt references both iconic buildings (look for a shout-out to the Forum when the art is in place) and lesser-known structures in the area. The architecture love extends to the blue “snap lines,” which represent a place’s timeline as well as the phone lines, traffic markings, and, now, train tracks that bisect the area.

Kenturah Davis, an artist often featured at Leimert Park’s Papillion Gallery, took photos of locals, then recreated the individuals’ likenesses for a piece that will decorate this bound-to-be popular station. Sometimes the emotions on the faces are easy to read; other times they’re more opaque.

Cyclist/artist Geoff McFetridge created giant figures that highlight the humanity that rides the rails, from gardeners to attorneys. Also look for allusions to architecture in the simple lines and bold shapes, which also reference geometry. The “flat color” is part of the artist’s style, according to Metro.

Artist Sherin Guirguis, a daily Metro rider, explores migration and cultural histories in her work, according to Metro. Guirguis finds inspiration in her homeland of Egypt, which is referenced in the station’s artwork, along with L.A.’s colorful sunsets and pieces of ironwork that can be found scattered around LAX. Guirguis’ vision will be fabricated with porcelain enamel steel on the platform and a patterned fence atop the elevated station.

RELATED: Here’s What the New Metro Station at LAX Will Look Like