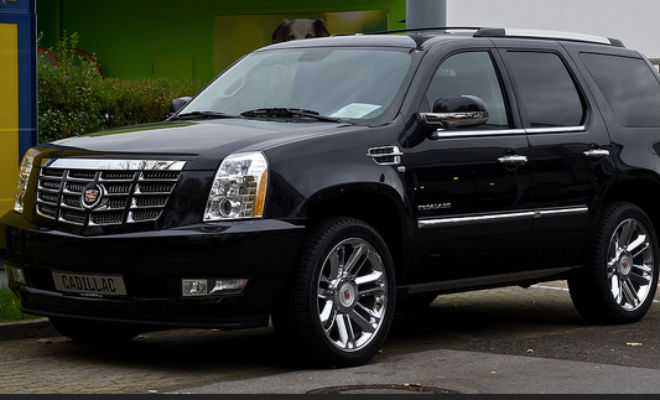 Feel like this Cadillac Escalade looks like a dinosaur? SUVs that were once wildly popular may be going extinct.

One of the trends coming off the runways, er, driveways, of the New York International Auto Show this week is the mini-SUV, a model that somehow balances productivity and practicality. The Chevrolet Trax, already on the market in Canada and Mexico and soon to debut in the U.S., gets 34 miles per gallon on the freeway and features almost 50 cubic feet of storage space. With similar petite SUVs soon rolling off BMW and Jeep assembly lines, it’s clear that many Americans still value spaciousness, but can no longer stomach gas guzzling behemoths.

Nissan Armadas, Cadillac Escalades, Chevrolet Suburbans and their hulking peers were once a ubiquitous sight in southern California, but appear to be slowly disappearing from L.A. streets. Sales figures indicate that feeling is not just anecdotal—the public began actively turning against SUVs in 2008, when the economy went south and gas prices shot through the roof.  Detroit’s emphasis on SUVs and other large vehicles contributed to the recent bankruptcies of General Motors and Chrysler. GM’s Hummer line, once the biggest vehicle on the market and one of the most egregious gas gulpers, went belly up four years ago.

But the seeds of discontent with such vehicles were sewn years earlier, not just with the lengthy wars in Iraq and Afghanistan and our reliance on foreign oil, but from media reports that highlighted their waste and danger. Maybe most memorable was Malcolm Gladwell’s 2004 New Yorker investigation that showed huge SUVs are not safer than standard cars, they’re just perceived as safer by the public. While huge vehicles may withstand crashes better than smaller cars, the latter—generally easier to control and more nimble—has better chances of avoiding such accidents in the first place.

Five months before Gladwell’s article, southern California set the stage for a national discussion on the wisdom of gas-guzzlers when environmental protesters torched a Hummer dealership in West Covina, causing $1 million in damage. A SoCal Hummer fan club later gathered at the scene of the crime to show their opposition to crimes against mega-vehicles.

A Hummer fan club certainly sounds like a joke in 2014 L.A. Zipcar, the vehicle sharing system, doesn’t offer typical SUVs in Los Angeles, only fuel-efficient crossovers like the Ford Escape and the Jeep Compass (you can borrow a truck if you need to haul an extra-large couch from Ikea). At Fox Auto Parks at LAX, a crossover will cost you an extra buck a day to park, but if you’re leaving behind a full-size SUV, two extra dollars a day is tacked onto your bill.

That’s not to say that cars larger than a Prius have completely gone out of favor in the U.S., or even California. Nissan and Jeep both had huge January sales, led in part by small SUVs and CUVs, or crossover utility vehicles. Though not hybrid, these smaller cars are a fuel-efficient mash-up between a hatchback, station wagon, and SUV. Ford found success in the Golden State last year with surging sales of their midsize Explorer SUV and small SUV Escape. It’s no surprise that carmakers are introducing more and more smaller SUVs and crossovers—just like Hollywood, Detroit can’t get enough of a safe bet.