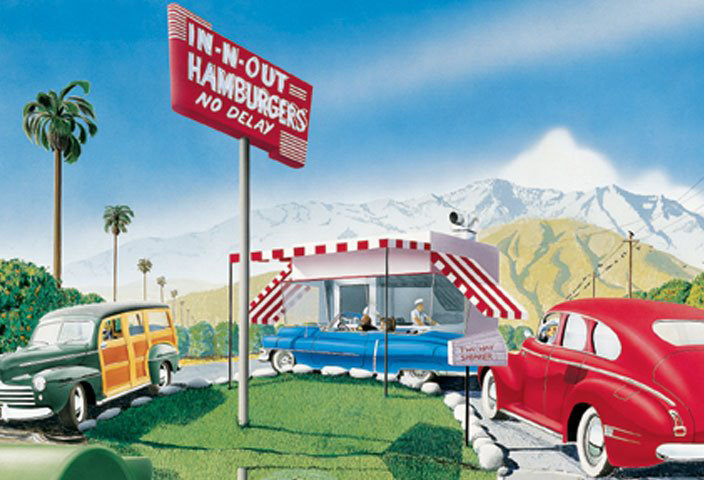 Even in our increasingly health-conscious nation, drive-through eating culture remains ubiquitous, with vehicular lines regularly snaking around L.A. burger chains, chicken joints, and cheap Mexican restaurants. The cult of the drive-through first penetrated the American consciousness in L.A and its ‘burbs, but it’s also the place where its slow death march began.

Local obsession In-N-Out opened in Baldwin Park in 1948 and besides their fresh-cut fries and immaculate crew uniforms, the burger joint established itself from the pack as a place to pick up a delicious burger without moving the lower half of your body. Family-owned, In-N-Out still claims to be the originator of the modern fast-food drive-through, though others — like Missouri’s now-defunct Red’s Giant Hamburg — balk at that claim. Whether it was the first or not, In-N-Out undoubtedly influenced others like Carl’s Jr. and White Castle. The corporate overlords of McDonald’s initially resisted the drive-through concept, but its franchise owners were clamoring for a new option to reach customers. Nearly 30 years after In-N-Out did it, an Arizona McDonald’s owner carved out the chain’s first drive-through in 1975.

Drive-throughs proliferated throughout southern California in the car-crazed mid-century, with burger places establishing the biggest presence, but KFC and Taco Bell (and, of course, the KFC/Taco Bell combo restaurant) also became part of the L.A. landscape, more acutely in the Valley and South Los Angeles.

But the winds of change were starting to blow in the 1990s, with strip malls and drive-through restaurants becoming “land-use pariahs,” according to the Los Angeles Times. By 1997, South Pasadena, West Hollywood, and Sierra Madre all banned new drive-through fast food restaurants. The complaints were both aesthetic and practical: the eateries weren’t architectural masterpieces and the idling cars were polluting the air and discouraging people from exercising.

The sentiment against drive-through accelerated in the 2000s, hitting a crescendo four years ago when Baldwin Park—yes, the home of In-N-Out— banned fast food drive-through establishments.

“We here in Baldwin Park have taken strides to create a healthy community, and allowing one more drive-through in is not going to meet that goal,” Baldwin Park city planner Salvador Lopez told USA Today.

Even if every municipality in Los Angeles County enacts a moratorium on fast-food drive-throughs, there’d still be no shortage of walk-free options to choose from. Heaping burritos, spicy teriyaki bowls, and messy BBQ are all available from the comfort of your car. There’s even a drive-through Starbucks, in Santa Monica of all places, where you can order a latte from your driver’s seat — skinny, of course, to suppress the guilt about being a little lazy.