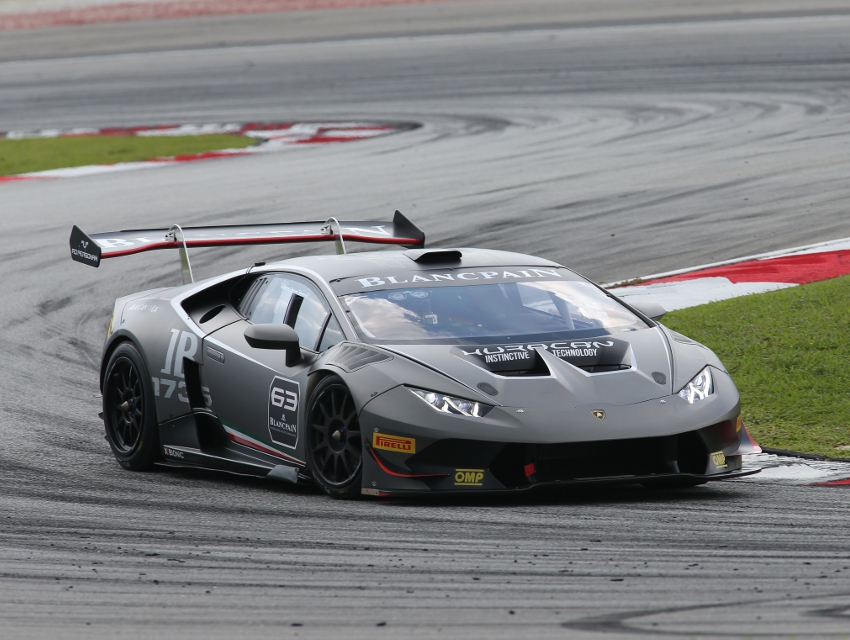 Lamborghinis are some of the loudest, fastest, and most obnoxious rides to roam L.A. roads—this much we know. But how do you heap further superlatives onto an already over-the-top exotic? If you’re Lamborghini, you convert your already feisty road car into a fire breathing track machine and go racing.

For decades, competition has fueled the lore of red-blooded rivals like Ferrari and Porsche. But apart from their Super Trofeo series, a relatively young Lamborghini-only racing league, the raging bull brand has been woefully deficient in that crucial arena. Aiming to boost its street (and track) cred, Lambo designed the Huracán, their latest entry-level model, with race-ready underpinnings from the ground up. Fresh out of the box in stock form, the V10-powered car has an animalistic snarl but a surprisingly manageable personality, sort of like a steroidal athlete who’s adept at keeping his wild side in check. The Huracán LP620-2 Super Trofeo race car, on the other hand, abandons all pretense of politeness in favor of violent forward motion and cheek-flattening cornering. For $325,000 (plus a $45,000 entry fee) you can buy your very own race car for a season’s worth of competition; travel, fuel, and maintenance costs are extra.

Bedazzled with a bevy of spoilers and scoops (not to mention stickers from tony sponsors like Blancpain watches and Alcantara), there are theatrical visual overtures to the Super Trofeo’s reconstituted focus. But climb inside the bare metal cabin (and wiggle past the big tubular steel rollbars), and there’s no doubt this car mean serious business: Body panels have been ripped out, niceties like leather, airbags, and conventional seatbelts have been ditched in favor of a lightweight bucket seat and a five-point harness, and glass windows have been replaced with shatterproof plastic. When you’re rolling in this track beast you don’t just twist the key and go; the startup procedure involves switching the battery on, pressing an ignition button, and holding a starter button until the ten-cylinder engine screams to life.

There’s no insulation inside this office, but that’s just as well: the unfiltered sounds in this four-wheeled cage are scary and wonderful, intimating an intense sense of purpose and emotion. It’s hard not to feel butterflies in your stomach the first time you sit ensconced in this race car, ready to pull into pit lane and roar onto the track—and appropriately enough, there’s a slight learning curve required to get this thing going. First, press that third pedal on the left while you press a white button on the steering wheel, then tap the right paddle shifter to engage into first gear. There’s a disconcerting grind and a slight nudge, followed by forward motion as you slowly let out the clutch and accelerate. Tap the “Pit” button, and speed is limited to 37 m.p.h. within the pit area (in keeping with race rules); release it, and the Huracán lurches forward like a stallion out of the gates, hopped up on amphetamines.

What proceeds is a mental mindwarp that forces re-examination of everything you thought you knew about high performance driving. While the Huracán responds to gas and steering inputs with hypersensitivity, its brakes require a serious stab—but once they grab, they produce incredible stopping power. Similarly, gassing the engine yields breathtaking acceleration, thanks to the fact that the hopped-up V10 is hauling hundreds of pounds less weight than its roadgoing counterpart. Hit a corner at high speeds, and the car’s behavior gets even more intense, thanks to significantly boosted levels of aerodynamic downforce, which help the Huracán stick to the track with eerie tenacity. All of this happens with sensory inputs cranked to 11—sights, sounds, and smells painting a sobering picture of how hard this machine is working to get you around the race track as quickly as possible.

After 20 minutes of wrestling this beast and pulling into the pits, my legs are quivering, my ears are ringing, and my heart is fluttering; turns out Lamborghini’s race machine is a seriously fearsome variation on an already angry theme. By tackling five European circuits in the Blancpain GT3 series in 2015 and the world stage in 2016, Lamborghini is hoping its spiced up two-seater will vanquish foes that once accused the Sant’Agata Bolognese manufacturer of being a poseur amidst the big boys. Whether or not those battles are won, this new era of racing can only mean good things for the brand—especially if some of the lessons learned at the track trickle down to future models, making Lamborghini’s bloodlines more formidable than ever before.

L.A.’s Next Uber Exclusive Car is the Lamborghini SUV