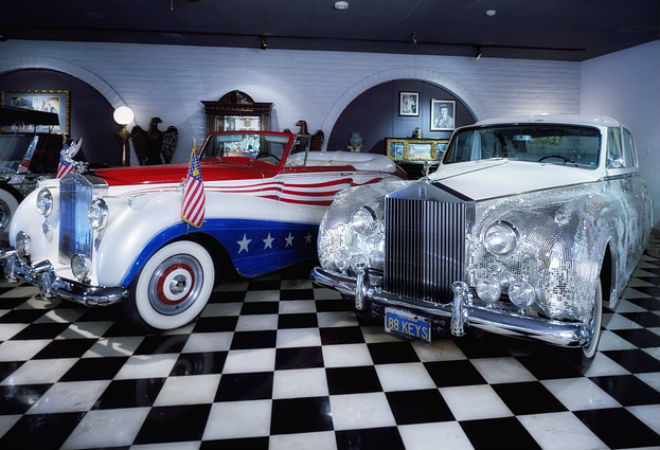 The flamboyant style of Liberace is getting a second life recently, thanks to Beyond the Candelabra, last year’s Emmy-winning HBO movie, and, more recently, in an exhibit on the pianist at Vegas’s hip Cosmopolitan resort and casino. The cool kids of the Cosmo can check out Liberace’s fox fur coat with 16-foot train, custom cowboy boots, rhinestone-adorned piano, and a small sampling of one of the performer’s great loves: his car collection. Liberace’s Swarovski-encrusted Roadster, which matches that rhinestone piano, is on display at the Cosmo, while his 1962 Rolls-Royce Phantom V Landau with retractable top and mirrored exterior can temporarily be seen at L.A.’s own Petersen Automotive Museum. These two beauties are just a sampling of the singers’ cars, many of which are sadly locked up in storage ever since the Liberace Museum closed its doors in Vegas four years ago.

A Volks-Rolls covered in tiny, jewel-like mirrors and a London taxi with working meter are two of the six luxury vehicles hidden away, according to Liberace Foundation chairman Jonathan Warren. Additional cars once owned by Liberace, but now in the hands of private parties, are also on their way to the foundation; the performer is known to have owned at least thirty cars before he died in 1987. But since the foundation—which hands out thousands of music scholarships paid for by Liberace’s vast fortune—shut down the museum, filed for Chapter 11, and reorganized itself, a new permanent home for the cars, jewels, and performance footage has yet to be found. Up until a few months ago, it looked like the flashy wheels would be parked inside one of the vacant retail spaces at downtown Vegas’s Neonopolis shopping center, but that deal fell through. “The Neonopolis plan was vacated mutually by its owner and our Board as not a good match for a large permanent Liberace exhibition,” Warren said.

While the Cosmopolitan and Petersen will feature the two cars for a few more weeks, Warren says the foundation is getting close to securing a partnership with a legendary Vegas casino where Liberace once performed. That sounds promising, but will there be enough space to hold the seven cars the Liberace Museum regularly featured? A permanent Liberace exhibit definitely needs the 1972 gold metal-flake, customized Bradley GT, the hot-pink 1971 Volkswagen Beetle convertible, and the red, white, and blue “Bicentennial” 1954 Rolls convertible that matched an outfit—with hot pants—that the showman memorably wore on stage.