Home Uncategorized Let the Sunshine In: Solar Roadways Could Be the Future 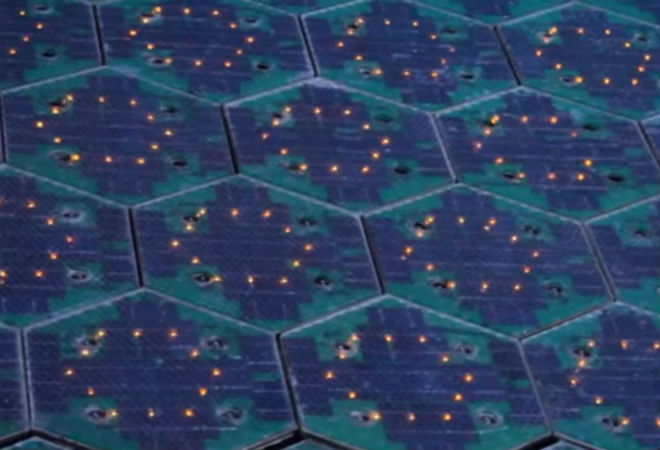 Los Angeles has 6,500 miles of roads; thoroughfares constantly baking in the heat and buckling under pressure. What if we could turn those roads, which currently only serve one purpose, into multi-tasking, over-achieving roads?

An Idaho couple has invested the better part of the last decade creating Solar Roadways, a concept that takes solar panels off the roofs of houses and places them under your commute. Scott Brusaw, an electrical engineer, and his psychologist wife Julie have been working on the concept for years, and the private and public sectors are starting to catch up. After winning awards from Google, presenting their prototype at NASA, and having the Federal Highway Administration fund two prototypes, the Brusaws turned to the crowd-sourcing site Indiegogo to help fund the next stage of the project, effectively raising over twice their goal of $1,000,000, and with days to spare. Their campaign was aided by videos on the   project that have garnered tens of millions of views.

The Brusaws’ solar panels are covered by a tempered-glass material that can withstand anything weighing up to 250,000 lbs. Within the panels are circuit boards, filled with LED lights that can serve as markers for lanes or parking spots, as well as information related to road conditions and accidents. The roadways also have something called “cable corridors,” which could hold electrical lines and take away the need for ugly, above-ground power lines.

The roadways could also make driving to Big Bear or through the Newhall Pass easier as the panels stay a few degrees above freezing, melting precipitation and ice. The melted water can be captured and treated, preventing pollution. In colder climates, the warming panels could save billions spent on snow removal and road maintenance. The Brusaws hope to build cycle paths, as well as sidewalks, with their technology, which means bikes could be used during snowstorms.

The Brusaws have already turned a parking lot in Sagle, Idaho into a “solar roadway,” and the Indiegogo campaign will enable them to install the panels all over their hometown of Sandpoint, including parking lots, sidewalks, the tarmac at a regional airport, and the passenger platform of an Amtrak station. If a tiny town in northern Idaho is willing to take a chance on the solar roadway, could Los Angeles? In a city of stars, Glowing LED streets certainly seem like they could fit in.