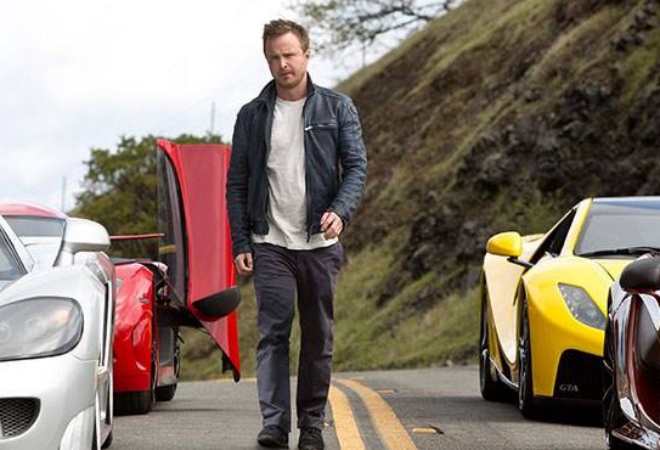 In theaters now: Aaron Paul and some of his co-stars.

A product of Dream Works, Need For Speed exists in a world not unlike Los Angeles, where everyone spends all their time in their cars, never stopping for food or lodging, and having no real conversations—only ones that revolve around cars and bad traffic. This world, not unlike like the one in Pixar’s Cars (and, of course, Cars 2), is one where anything and everything that matters is about cars. Or speed. Or cars. Or winning pyrrhic victories in your car to avenge something that happened in—you guessed it—a car.

If you’ve ever met an actor in real life, you’ll know that (Breaking Bad star) Aaron Paul’s consistent mumbling adds a real touch of L.A. to the movie. Even the cars emote more than Paul. That’s not to imply that the movie isn’t good, but value judgments seem beyond the point in a film where the hero car, a tricked out Ford Mustang, has more presence than the leading man.

That said, the stunts are pretty spot-on and the driving sequences are really amazing, especially the extended sequence where our protagonist needs to get out of Detroit as quickly as possible—something that many of us have experienced at one time or another, I’m sure.

With Scott Waugh at the helm, Need For Speed looks and sounds like the big budget movie it is—especially in 3-D. The film will stay with you the next time you’re stuck in traffic: you’ll wish for a 1000 horsepower Mustang, a Cessna giving you traffic directions, Imogen Poots sitting shotgun, and an unlimited budget for car repairs, which you’ll need, because ‘driving it like you stole it’ usually ends up producing some serious front end damage.