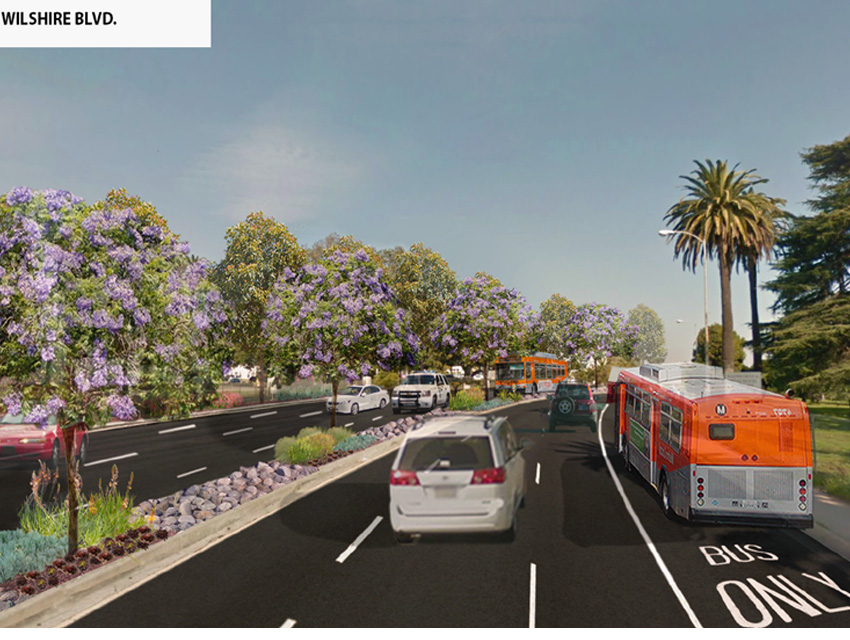 A patchwork rush-hour bus-only lane on Wilshire Boulevard will be officially completed and open for business on Monday morning, Metro reports. Though some have grumbled the lane is broken up in segments of Beverly Hills and Santa Monica, it has brought some traffic relief to bus riders since opening its first segment in April—though some headaches to crosstown drivers.

The final leg of the bus lane—just short of a mile—runs from Centinela Avenue at the L.A./Santa Monica border to Federal Avenue in West L.A. The added stretch brings the bus-only total on Wilshire to 7.7 miles. The bus-only rules (which are often broken by drivers, tsk tsk), apply from 7-9 a.m. and 4-7 p.m.

The $31.5 million bus lane now runs from MacArthur Park to San Vicente Boulevard, just east of Beverly Hills. It then picks up from the western BH border and runs to Comstock Avenue, cutting out at Condo Canyon before picking up at Selby Avenue and ending at Veteran Avenue, near the 405. With Monday’s opening at 7 a.m., they pick up again at Federal Avenue and now run to Centinela.

Some rules to remember:

4 Bus-Only Lanes That Would Change the Way People Get Around L.A.

This New-to-L.A. Bus Service Is Offering Tickets to Vegas for $2.99