Home Uncategorized Lane of Luxury: The Mercedes-Benz C-Class and S-Class 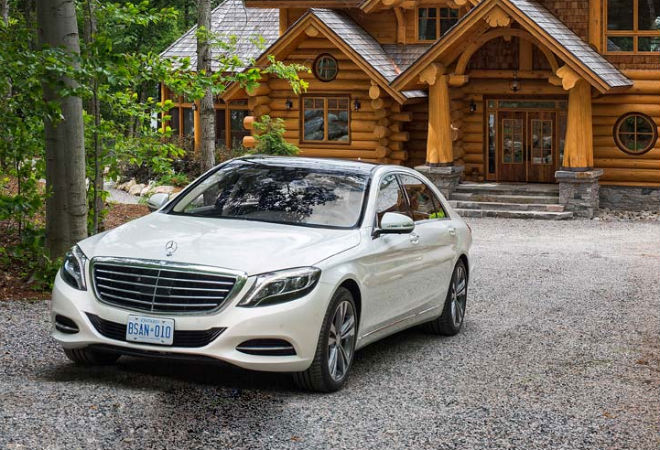 Could the "s" in Mercedes-Benz S-Class stand for "spa?"

Think your car has everything you’ll need to keep you calm, cool, and collected as you crawl through snarled traffic on Wilshire Boulevard?  Do you ever think, “You know what? My car should be more like a spa”?

Mercedes-Benz has heard the cries of despair from the unmassaged masses, and the German luxury brand has created a moving, rolling comfort cocoon of Zen with its new flagship S-Class—a 17-foot-long, 4400-plus pound Burke Williams with rear seats that have a hot stone massage option and their own dedicated app to control all of the kneading.  Those rear seats, if you are lucky enough to be able to opt for the $15,500 worth of options on top of the $92,900 price tag, creates a dreamlike state of comfort, where one is lulled into the gloaming of relaxation not unlike an hour of savasana in a hot yoga class.  And they said comfort doesn’t have a price, pfffttt. If that’s not enough for you, the new top of the range S-Class has four interior scents to choose from: Nightlife, Freeside, Sports, Downtown – as a part of a $350 “active perfuming” Air Balance package, with each scent redolent of a walk in the rain in the forest outside of Stuttgart, just in case those vanilla-scented trees dangling from the mirror are too déclassé.

Driving in L.A. is a full contact sport and the luxury car brands are not kidding around: Every year, like clockwork, we see them rolling out new and absurdly more awesome features on their dream cars.  Mercedes-Benz, sensing competition from not only the other German brands but also the likes of Tesla, had to hit the upgrade button.

The S-Class, for 2014, has seen a major redesign with some beautiful features like swooping ash-wood inlays in metallic pearl colors, enough leather to clad a thousand Justin Biebers and some new and seriously sinewy sheet metal. Also, in a nod to the times, the navigation and technology in the vehicle also received a thorough face-lift, bringing the S-Class more in line with 2014 than 2004. #Ping!

“Los Angeles is very important for us as the West Coast is one of our largest markets.  In L.A., there is just a really special car culture. People there have to love cars because they are always in them,” said Tobias Müller, head of lifestyle, brand and social media at Mercedes Benz, “We want you to be comfortable and relaxed in the car because this will help to drive in a more relaxed and chilled manner, which is much safer.” In L.A., where your car becomes a lifestyle, you don’t need to shell out the $100K entry fee on the S-Class to join the club as Mercedes-Benz will roll out an entirely new C-Class this fall. We recently had a chance to drive the 2015 model C-Class, the tri-star’s under-$40K volume leader and gateway drug to the Mercedes brand. Where the previous generation was getting a little long in the tooth, the new iteration looks and feels more like a baby S-Class than the frumpy sedan you see in every parking lot dotting the Southland. The differences between the new C-Class and the previous generation are as startling as Jen and Angelina. Where the previous C-Class was an efficient little sedan with shots of luxury sprinkled about, the new model is all about the tech, safety, and a newfound sense of luxury.

At, um, above freeway speeds, the car feels assured and planted, the Diamant Silver C250 that we drove was as light as a panther on winding mountain roads and, might I add, looks great in the city too. The C-Class finally drives like the stately sedan it has aspired to be.  While it will never perform, nor have all the functionalities of its pricey brethren, including those awesome rear seats and the powerful V8 engine, it’s not meant to. The C is the little brother to the S in ways that finally matter.  Looks, drivability, technology, all at a price your accountant will approve.

But is it enough to convince the Gentleman Journalist he really doesn’t need a brand new, fully-kitted S-Class in his livery?  Let’s not push it.