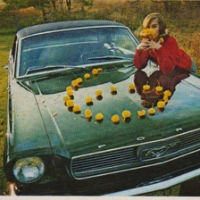 The very first Ford Mustang often gets referred to as a “1964 ½” because it debuted in April of that year, more than three months before car companies traditionally released their new models. But that’s not the only way this American icon was ahead of its time. Before it was a brand or a lifestyle or a club (with jackets), Mustang was one of the first cars to challenge a male-dominated auto market and reach out to female consumers.

“Life was just one diaper after another until Sarah got her new Mustang,” reads one advertisement from 1965. Another boasts how Mustang means big excitement, but with big enough trunk space for all a sweetheart’s groceries.

Ford even reached out to single ladies, who hadn’t previously been considered potential car buyers, lacking access to a husband’s bank account. Playing on the bestselling, head-turning Sex and the Single Girl (written by Cosmopolitan’s longtime editor-in-chief Helen Gurley Brown), one ad reads, “Six and the Single Girl.” The six refers to the ‘Stang’s V6 engine: a “husky, suave brute” that will be “extraordinarily considerate of a girl’s feelings.” Hmm, sounds like a perfect boyfriend.

These ads hadn’t even been published yet when the first ever Mustang was purchased by an unmarried 22-year old, Gail Wise, who used over half a year of her teacher’s salary to buy her “sky-light blue” convertible.  “I remember the salesman telling me that the Mustang was more of a muscle car, but I said, ‘Girls like to have fun, too,’” Wise said of her purchase. The Detroit native drove the car for 20 years, through her single days, married years, and the childhoods of her four kids. She and her husband restored the car together—its value has been estimated at over $300,000.

Now, as Ford reports that women control over 80% of the automotive global market, Mustang’s initial ads read like instructions for the telegraph. But, in my opinion, recognizing that women could handle (not to mention enjoy) a stick shift 50 years ago was a left-hand turn in the right direction. California holds the second highest population of Mustangs in the country. Today, Pony-lovers all over the country will celebrate the car’s 50th anniversary by participating in meet-ups, drives, or checking out the GT that Ford put on the Empire State Building.

And maybe, by picking up some groceries along the way.