Home Food & Drink L.A.’s Top Chefs on the Intersection Between Food and Cars 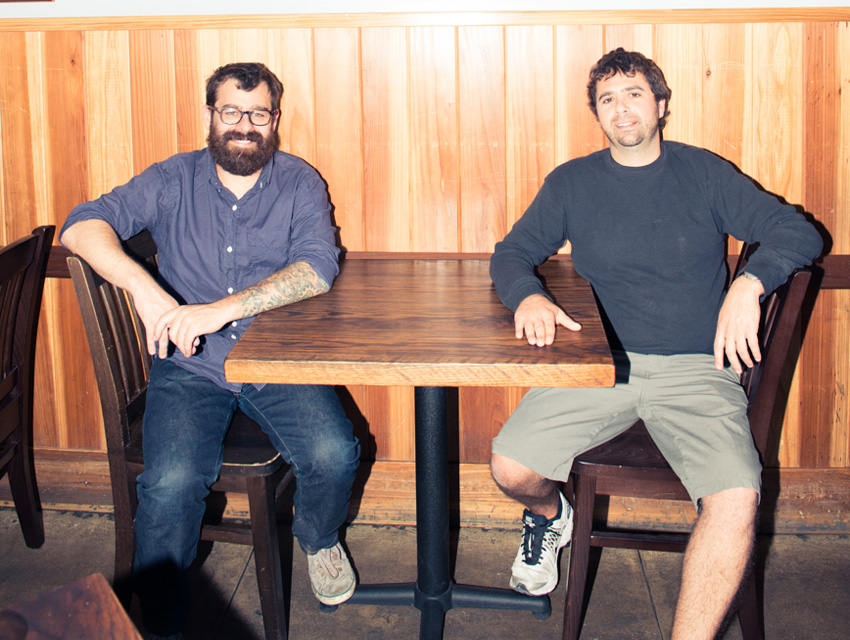 While you may not always think chefs and cars go together, there really is a deep connection between the two. I’ve spent a lot of time in the kitchens and dining rooms across the city and, it may be the fact these people cook in one of the most car crazy places in the world, Los Angeles, or the fact that these chefs put their heart, soul and other extremities into their food, but, there is an abiding love for cars and all things mechanical from the men and women who work the lines and run the front of the house.

Chefs have a way of distilling what you, the diner, wants and deliveries it in a plate of fat, salt, savory and sweet and the more layers of complexity and deep-thought the chef puts into their craft, the more intense they usually are.

The two chefs in L.A. who exemplify this are Jon Shook and Vinny Dotolo, owners of Animal, Son of a Gun, Trois Mec and the soon to open Jon & Vinny’s, located on Fairfax Boulevard in the late lamented Domiano’s space, where, as an aside, this writer spent a large portion of his youth eating pizza and watery crudités after hours. The two make great partners and, in interviews, a kind-of live Punch and Judy show, with Shook more loquacious than the laid back Dotolo.

I recently had a chance to sit down with two, who happen to be car fanatics since their days growing up in Florida where they both had family members who were either mechanics, car collectors or, in Dotolo’s case, the son of a Corvette obsessive.

When asked about cars, the conversation veered from the obtuse to the hilarious, where the two, both separately and together, cycled through everything from a Chevrolet Blazer and a junky Chevy Celebrity station wagon to a series of pickups and vans from their catering days in Los Angeles. The days of broken down jalopies are over because, as it happens, the two are part of the Lexus Culinary Masters program, which fulfills an ambition to mix their love of cars and food. As part of the program, they each drive a Lexus RX 350, which they love for the SUVs pure creature comforts. This writer promised to be their auto concierge next time the opportunity arises to help them spec and trick out their next Lexus model.

When asked how the years of hard work mixed with their sometimes junky cars played a roll in their success today — which only comes from long, long, long hours and a lot of dedication — Shook replied for the two, “What it did was that it taught us to be dedicated and that [success] takes a lot of hard work. When you watch someone fix a car and you’ll see how dedicated they are to get it back up and running…and growing up in that environment, which is a reason why Vinny and I became such good friends 15 years ago. In the South they like to say ‘cut from the same cloth’ and both our families had a lot of drive to get their car fix and that gave us our drive and our work ethics.”

You can see, if you look and taste at their food — complicated, flavorful and joyful — that it really comes from a DIY background and an obsessive thought process of, How can I fix this and make this better.

Another obsessive is the pastry chef and, if you’ve ever met a pastry chef, they oscillate to a different frequency than you or I. Their days are measure in grams and perfect measurements and, as of late, frequently involves the use of precise and complicated machinery.

I had the good fortune of spending an afternoon with Kriss Harvey (pictured below), executive pastry chef of The Bazaar by José Andrés and one of the most interesting people in the food industry I’ve had a chance to speak with. He too, is a Lexus owner — in his case an IS 250 — but the car he dreams about is Maserati Granturismo, which he compares to a wonderful gold-foil covered chocolate bar he makes at Baazaar. Both are fantastic. To say Harvey is an obsessive is an understatement. I spent an afternoon with Harvey as he walked me through the kitchen and explained how he started as a cook and moved over to working pastry a few years into cooking and how the molecular gastronomy movement started, in his words, “nicking from pastry chefs, so they can rearrange their food into different shapes. This is something pastry chefs have been doing for years.”

When asked to explain how the exacting and fastidious nature of being a pastry chef dovetailed with his love of cars, Harvey paused and explained how it compared with Audi’s Le Mans pit crew — the idea of a whole team working together to create a cohesive whole and how it all comes together with a lot of hard work.

“I have put my entire life into my profession, sacrificing sleep, meals and working though the fatigue, the pain and the agony. This profession can be very humbling…We made a new item yesterday and if it just wasn’t good enough, we kept working on it and working on it. I was here for 14 hours and it finally worked out great.”