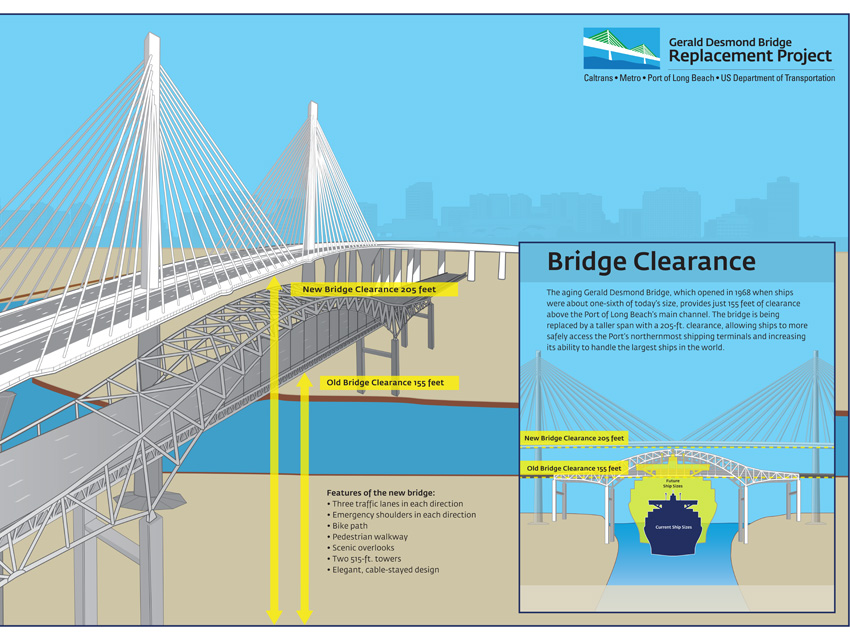 Many in L.A. are eagerly awaiting work to begin on a striking new Sixth Street bridge connecting DTLA’s Arts District to Boyle Heights. But at the southern tip of L.A. County, another enormous bridge project is making progress.

On Wednesday, a long-term closure of eastbound Ocean Boulevard in Long Beach begins—it’s necessary for a new $1.5 billion replacement of the 1968 Gerald Desmond bridge. “For this long-term closure, all vehicles will be detoured to Pico Avenue or northbound I-710 freeway,” according to the project’s website. “When approaching the detour, traffic heading to downtown Long Beach should stay to the right. Traffic heading to NB 710 should stay to the left.”

Look for signage for help with directions, and keep apprised of related- and short-term closures.

The bridge replacement began early work in 2013 and is expected to wrap in 2018.  The reason for the costly replacement: the 1968 bridge cannot accommodate the enormous modern cargo ships that dock in the area to import and export the world’s goods. The new bridge, buoyed by two handsome 515-foot towers, will have a new clearance of 205 feet; 50 feet more than the previous incarnation. The final version will include three traffic lanes in each directions, emergency shoulders in each direction, a bike path, a pedestrian walkway, and scenic overlooks.

A Sixth Street Bridge Bash Got a Bit Out of Control