Home Uncategorized In Defense of the 2014 Porsche Macan 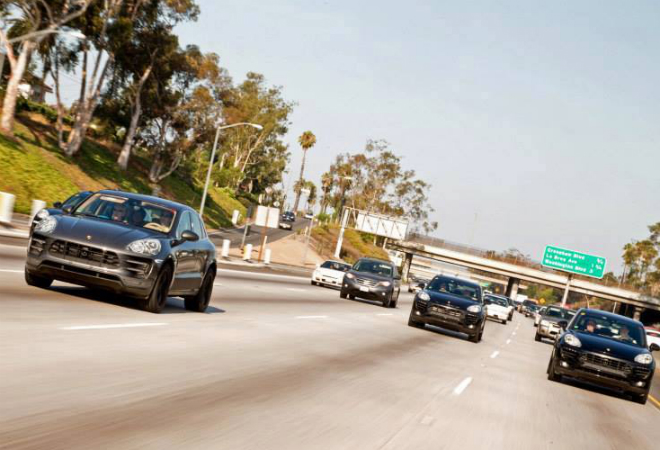 Does this scene look familiar?

Porsche sold only 18,507 Cayenne SUV’s in Los Angeles during 2013. Which is surprising, considering that sometimes driving in L.A. traffic, it seems that all 18,507 are stuck next to you on the 405.

It’s an understatement to say Porsche moves a lot of metal in California – the state is their number one market in America, and the region represents over 20% of all total Porsche sales – and it’s not the 911 or the Boxster or the Cayman that’s moving all those units, it’s the SUVs.

While some purists may still, some 10 years after the Cayenne’s introduction, scoff at the idea of a Porsche SUV, I think the scoffing, really, is pure poppycock. Saying Porsche shouldn’t make SUVs is like saying you really don’t want to drive something practical and truly great to drive, that it’s too much awesome, if that’s possible. It’s a specious argument. At the L.A. Auto Show in November, Porsche pulled the wraps off their latest SUV, the Macan, which is slightly smaller than the Cayenne, but aimed a whole new—and may I add, younger—buyer.

“It opens up a new market for Porsche, a market we would not be able to go after with the Cayenne,” Matthias Müller, CEO of Porsche AG said to me recently while visiting the new billion dollar manufacturing plant in Leipzig, Germany. “The strength of the brand is enormous. The Macan is a typical Porsche—it’s dynamic to drive with a very nice design.”

When asked if the company had the giant California market in mind during the development of the SUV, Muller replied, “We don’t develop cars for California, we develop sports cars, and the Macan and Panamera and Cayenne are all sports cars. No other OEM (Original Equipment Manufacturer) is able to develop a car like a Macan.”

Detlev von Platen, President and CEO of Porsche Cars North America, elaborated. “I believe the car will resonate everywhere,” he said. “California is our largest market in the USA, and Porsche has a long history in California. We view the Macan as ‘Porsche intensified,’ and with the Macan, we think it expresses the way people live in California—people are active in sports, active in their free time and active with the way they live.”

So, what is this new younger and more active Porsche SUV like to drive? I had a chance to test both the new Macan S and the crazy-as-all-get-out Macan Turbo, and they both lived up to (and in some cases, exceeded) their big brother Cayenne.

The Macan Turbo, with its $72,300 starting price (though once you trick it out, the price comes closer to $95K) is a lofty and truly aspirational car. With its twin-turbocharged 3.6-liter V6 engine with 400 horsepower, 406 pound-feet of torque and a seven-speed PDK dual-clutch transmission, it’s extremely fast. Not to mention, at the autobahn speeds we hit, it was a blast to drive. (Any small SUV that makes you feel safe at 240 km/hr is my kind of SUV). It’s also an SUV that many people won’t buy, save for those who need the best. Which is to say: the L.A. luxury buyer. It’s the Macan S with its starting $49,900 price tag that hits the sweet spot for most L.A. buyers. I spent time with the Macan S both on road and on a short off-road course.

To say the Macan S drives well doesn’t begin to do the experience justice. It’s a Porsche, which means the build quality is excellent, the drive is fantastic, and, if you’ve spent any time in a modern Porsche, it hits all the high notes: the interior is modern and fresh, the Porsche key fob goes to the left of the side of the steering wheel, and, of course, the center console is laid out like the controls of a Cylon battleship. The seating is low slung and snug, just like in a 911. With a 340-hp, 339-lb-ft, 3.0-liter, twin-turbo V6 engine and a seven-speed PDK dual-clutch transmission, the Macan S is well beyond sporty and will scoot you around town at both high speeds and in high style.

Porsche is aiming to sell 50,000 Macans in 2014, and each and every one will most likely be sitting in traffic right next to you and that brand new Cayenne. The Macan is a perfect embodiment of an L.A. car: it looks great, drives great and will make you feel like you’ve made it. Really, when you do the math, it’s cheaper than acting lessons or therapy.