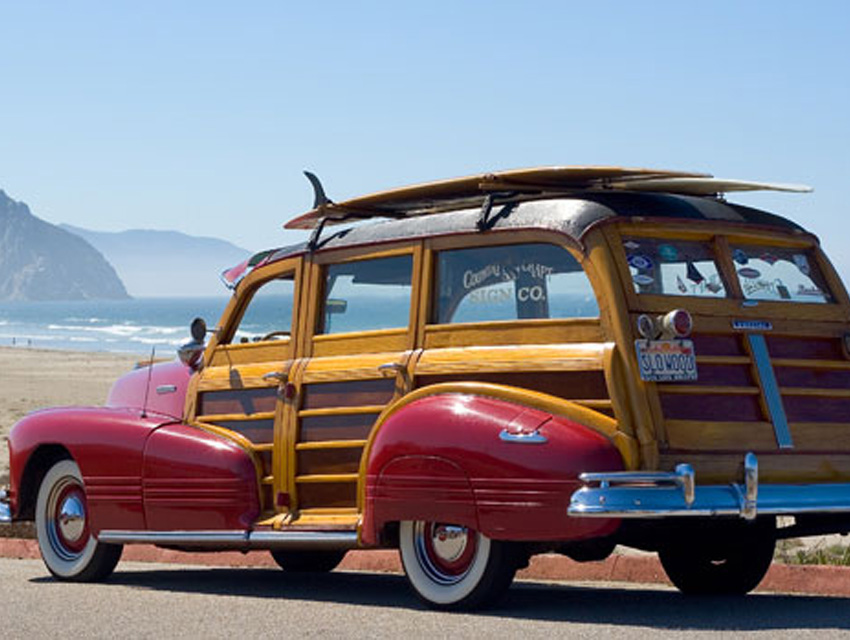 Continuing our look back at the intersection of car and surfer culture, this week we take a look at an oldie and a goodie: the woodie.

Perhaps the most iconic classic surf mobile, the woodie’s roots go back to the early 20th century. A hold-over from the horse-drawn carriage days, hard wood locomotives were a common site at the turn of the century, when steel was more expensive than wood. Once steel became more affordable, it replaced hardwood on certain applications, but for aesthetic purposes, the passenger compartment remained wooden. The 1929 Model A was the first mass-produced woodie car. Its hood, front bumper and rails were steel, but the entirety of the passenger compartment was hardwood. Other manufacturers followed suit, including Plymouth, Buick, and Chrysler. Chevrolet, despite being the biggest car company at the time, was the last to join the trend, debuting their first woodie in 1939.

In the ‘40s, the vehicles, previously known as “depot hacks,” came to be known as station wagons–their large passenger compartments were ideal for carrying people and luggage to and from train stations (ever seen White Christmas?).

By the late ‘40s, as World War II drove to a close, manufacturers began phasing out the use of wood in their hard bodies. There were many good reasons for that—lumber supplies were dwindling; the wood had to be tediously and expensively hand assembled; the wood was purely a cosmetic feature, providing no practical purpose. In addition, the au naturale wagon bodies had serious, and predictable, problems: rot, splintering, moisture damage (imagine driving it in Seattle). Finally, manufacturers and consumers alike realized that a car is not a piece of furniture. By 1950, the wood on most wagons was merely pasted on, in the form of wood-grain decals. The last full production wagon featuring real wood accents was the 1953 Buick Super Estate.

As the original woodies disintegrated into oblivion, the all-steel, Griswold-destined station wagon moved into American garages, and stayed there for the next 40 years. As sub-cultures rose to the forefront of the national consciousness in the 1960s, broke, nomadic surfers realized the old woodies, rotting in yards and garages all over America, were perfect for longboards, shortboards and entourages of thrill-seeking buddies. Many grabbed them cheap off owners who just wanted to free up some space, and rode them into a new era of reclaimed purpose, while surf bands provided the soundtrack:

With our boards inside

And headin’ out singing our song

You know its not very cherry, it’s an oldie but a goodie

But it still gets me where I want to go.